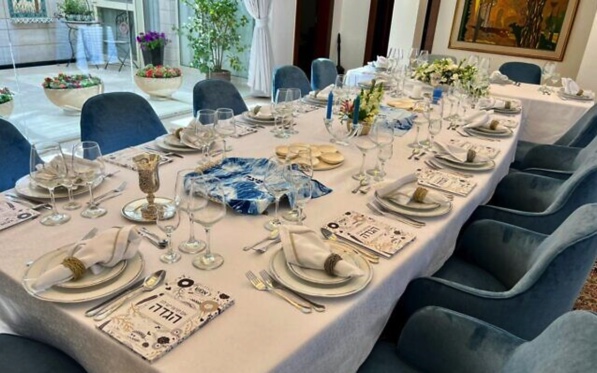 President Isaac Herzog and First Lady Michal Herzog will host a traditional Passover dinner at the President’s Residence for the first time on Friday evening.

Together with their three sons, the couple will be joined for the festive meal, known as a “Seder,” by lone soldiers, new immigrants who escaped the war in Ukraine, and US Ambassador Tom Nides.

The Seder table will be laid out in the traditional manner and will feature Judaica by Israeli designers, according to a statement issued by the President’s Office, and the Haggadahs to be used at the Seder were purchased at Enoshop, the store of Enosh—The Israeli Mental Health Association.

The lone soldiers expected to attend Friday’s Seder include Sergeant Glen Chaves, a lone soldier from Costa Rica serving in the IDF Kfir Brigade, who made aliyah because of his grandfather’s special connection to Israel and family’s conversion, and Cpl. Iara Lerner Turchinsky, a lone soldier who immigrated from Argentina two years ago and serves in a canine unit in the Israeli Air Force.

The Ivanova family from Ukraine will also join the presidential Seder table. Ilena, the mother of the family, fled Odesa together with her two children, nine-year-old Vadim and two-year-old Yevgeny. Their father, Aleksander, was forced to stay behind in Ukraine, as men of military age are barred from leaving. The family currently lives in accommodation organized by the Jewish Agency to help new immigrants from Ukraine.