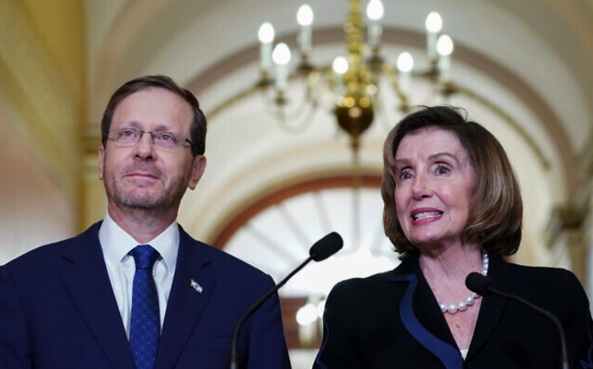 Herzog invited to address US Congress, 1st Israeli to get honor since Netanyahu

President Isaac Herzog was invited Tuesday to address a joint meeting of the US Congress to mark the 75th anniversary of Israel’s founding, which congressional leaders called a “historic and joyous milestone.”

House Speaker Nancy Pelosi and Senate Majority Leader Chuck Schumer issued the invitation to Herzog in a joint letter in which they said the two nations share “an unbreakable bond rooted in common security, shared values, and friendship.”

The date for Herzog’s address has not been set. The State of Israel was proclaimed on May 14, 1948, and US president Harry Truman recognized the new nation the same day.

In their letter, Pelosi and Schumer said Truman’s swift action “has always been a point of pride for our country.”

“Across the decades, the United States Congress has been proud to stand in solidarity with Israel on a bipartisan and bicameral basis,” Pelosi and Schumer wrote. “It is our hope that the Congress will have the opportunity to hear from you at this historic and joyous milestone in the success of the State of Israel and the US-Israel alliance.”