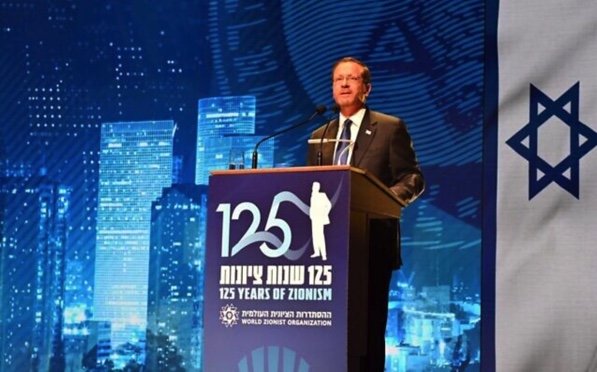 Herzog calls to ‘reclaim Zionism,’ turn it from a slur to a source of pride

President Isaac Herzog on Monday called for the reclamation of the word Zionist as a positive term, saying it has been turned into a slur to abuse Jews and Israelis.

Speaking at an event marking the 125th anniversary of the First Zionist Congress, Herzog said Zionists — people who believe in the right and necessity of Jewish self-determination in the biblical land of Israel — must work to take back the word to be “an expression of our own national identity, traditions, hopes, pride, enlightened values, justice, and commitment to tikkun olam,” the latter being a Hebrew term meaning “repairing the world.”

Herzog, speaking in Hebrew at the mostly English event, made his remarks at the Stadtcasino concert hall in Basel, Switzerland, the same location where the First Zionist Congress first met on August 29, 1897.

“Today, 125 years after that formative moment when a handful of pioneering, inspirational Zionist leaders, changed human and Jewish history forever here in Basel, the cradle of political Zionism, in the hall where Theodor Herzl opened the First Zionist Congress, I stand before you as the President of the State of Israel, having come from Jerusalem, the eternal capital of the nation-state of the Jewish People,” Herzog said.