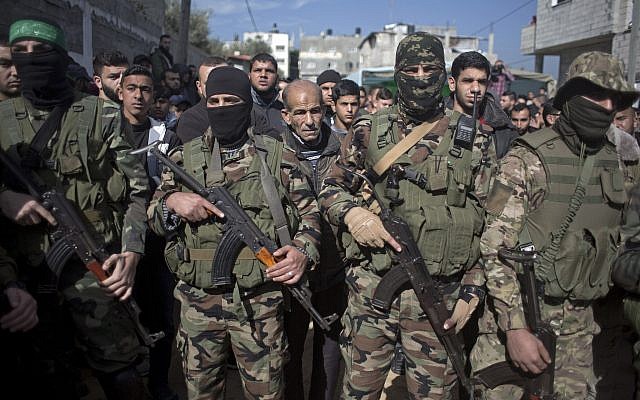 Hamas has sent a warning to Israel that it will respond forcefully and immediately to any attack on the Gaza Strip, a Lebanese newspaper reported Friday.

Quoting an unnamed source in the Gaza-ruling terror group, the Al-Akhbar daily also said Hamas refused to accept aid money from Qatar as Israel put new conditions on its transfer, according to Hebrew media reports.

The source said these conditions included Israel’s objection to using the $15 million in Qatari funds to pay the salaries of a number of top Hamas members.

Hamas’s rejection of the money from Qatar has stoked fears in Israel of renewed violence on the Gaza border, which has seen large-scale weekly clashes since last year and periodic flareups between the Israeli military and Palestinian terror organizations.

Israel had temporarily held up the transfer of the Qatari aid following a pair of shooting attacks on the border Tuesday but on Thursday gave its approval. Hamas announced shortly after it would not take the funds, accusing Israel of violating a ceasefire agreement.

According to Al-Akhbar, Qatar’s envoy to Gaza Mohammed Al-Emadi told Hamas that Israel was on standby in case of a military conflict with armed groups in Gaza. The daily said Hamas, for its part, warned its response would be larger than a massive exchange of fire between the sides in November that saw the largest number of rockets shot toward Israel since the 2014 Gaza war.

That round of violence came after a botched special forces operation in the Strip which saw an Israeli commando and at least seven Hamas fighters die in the ensuing firefights.

In light of the renewed tensions on the border, the Israeli military on Thursday began beefing up its troop presence near Gaza.  It also deployed Iron Dome missile defense batteries in the Tel Aviv metropolitan area and in the south as a precautionary measure against potential attack from either the Gaza Strip or from the north, where the security situation has also been increasingly precarious.