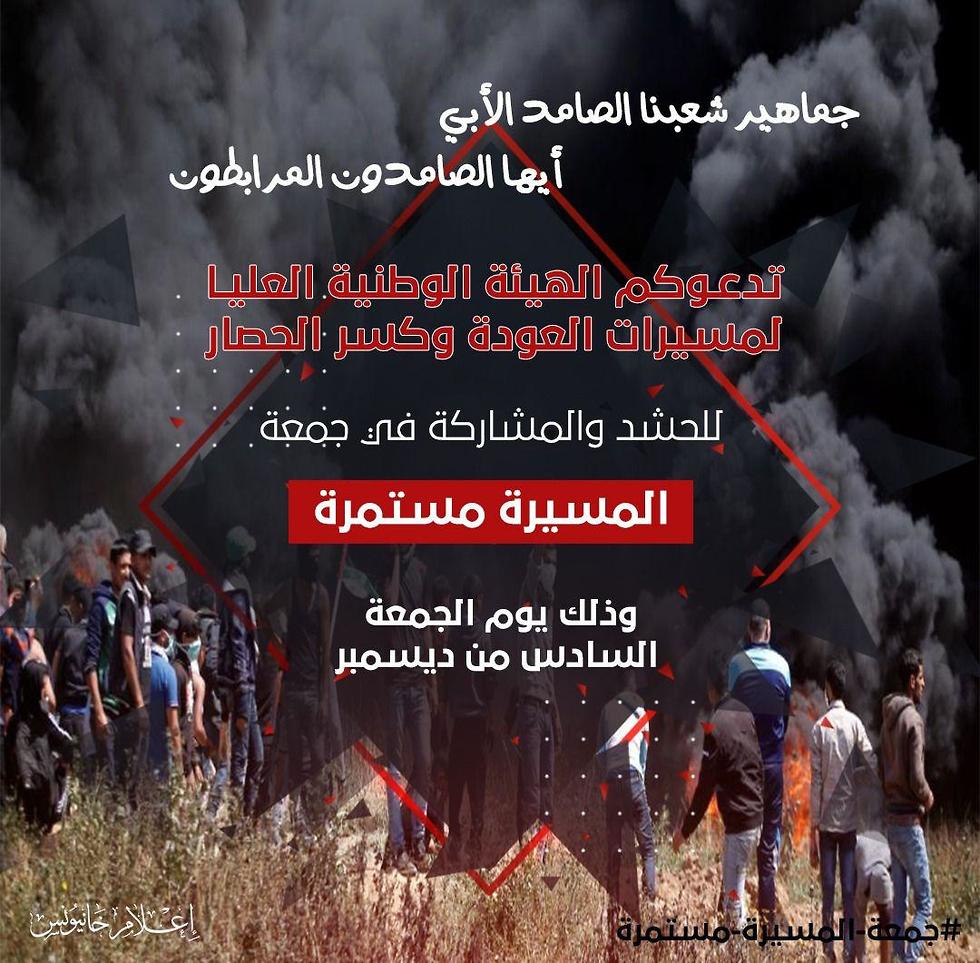 Hamas has called on the Gaza Strip residents to come out in droves for a demonstration against Israel on Friday as March of Return protests expected to be renewed after a three-week hiatus.

On Tuesday, leaflets published by the terror group began circulationg among the residents of the coastal enclave. The leaflets appear to be violent in nature, with black smoke and images of blood splattered across.

The protest would be the first since the latest flare-up between Israel and the factions in the factions in the Strip (dubbed in Israel as ‘Operation Black Belt”). The cross-border round of fighting was sparked by the targeted killing of Islamic Jihad commander Baha Abu al-Ata in a predawn Israeli airstrike.

Hamas appeared to have stayed largely out of the fighting, while Islamic Jihad fired hundreds of rockets at Israeli population centers, while the IDF responded with retaliatory airstrikes on the terror group’s militants and infrastructure. Egyptian mediators managed to broker a ceasefire between the two sides two days later.

Last Friday afternoon, 16-year-old Palestinian Fahed al-Astal died after he was shot in the stomach by IDF troops during an unsanctioned protest along the border fence. Four other people were wounded, according to Gaza officials.
The five hurled improvised explosive devices at the IDF troops.

The protest took place despite Hamas’s decision to suspend the weekly March of Return demonstration for the third consecutive week, in line with Israel’s request as part of the negotiations for a sustained period of calm in Gaza.

A member of the March of Return steering committee said after the death of the teen that Israel was responsible for the loss of life and called on protesters to turn out for a demonstration the following week.

The IDF said the claims regarding the circumstances of the boy’s death would be investigated, adding that dozens of rioters had arrived the border independently, tried to sabotage the fence and threw explosives at the IDF troops there.

Meanwhile, Beirut-based newspaper Al-Akhbar reported on Wednesday that Hamas leader Ismail Haniyeh and Palestinian Islamic Jihad leader Ziad Nahala met to discuss their understandings on the removal of the blockade over the Gaza Strip.

Al-Akhbar, which is considered very close to Hamas, also reported that UN special envoy to the Middle East Nickolay Mladenov is expected to meet in the coming days with the Hamas leadership in order to complete the negotiations on the ceasefire arrangement with Israel.

Mladenov and Hamas leadership will also discuss the possibility of reaching a long-term settlement agreement with Israel, which will include a solution to the most pressing issues – including the two Israeli captives and bodies of two fallen IDF soldiers held by Hamas and easing of the blockade on the Strip.

Meanwhile, Qatar reportedly considers equipping the Gaza power station with a direct gas line to produce electricity and to transfer $25 million to the Israel Electric Corporation.