Hamas leader Yahya Sinwar: If not for Iran’s support, we would not have our missile capabilities 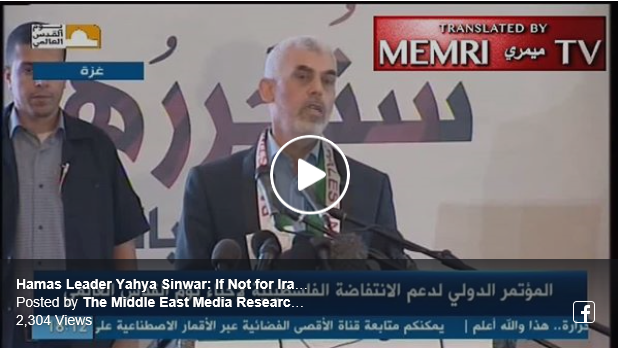 Hamas leader Yahya Sinwar said in speech that aired last week on Al-Aqsa TV (Hamas-Gaza) that the conflict with Israel will only end with the removal of the occupation from Palestine and with the Palestinians’ return to the “liberated and cleansed” Al-Aqsa mosque. He said that the Palestinians “suckled this spirit” from their mothers, who “breastfed [it] to their children along with the milk.”

In addition, Sinwar said that the Grad and Fajr missiles that have been launched at Israeli cities such as Tel Aviv and Beershevea were either provided by Iran or developed locally with the financial and technical support of Iran. He threatened that Tel Aviv and other Israeli cities would be “crushed” if a future conflict with Israel erupts, and added: “If not for Iran’s support for the resistance … we would not have obtained these capabilities. Our [Arab] nation has deserted us in our difficult moments, while Iran has supported us with weapons, equipment and expertise.” The speech was delivered on the occasion of the Iran’s “Quds Day.”

Yahya Sinwar: “I hereby declare that this conflict will only end with the removal of the occupation from all our occupied lands, and not before we return to Jerusalem and pray in the squares of the liberated and cleansed Al-Aqsa mosque, Allah willing.