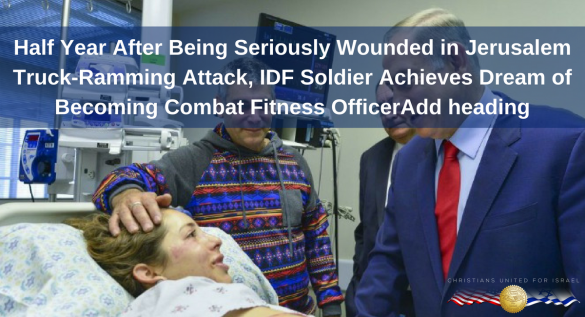 Four people were killed and more than a dozen were wounded in the Jan. 8 incident in which an Arab terrorist from East Jerusalem drove into a crowd of soldiers at the Armon Hanatziv promenade in the Israeli capital. The attacker was shot dead at the scene.

Ofir, 20, recounted for Walla, “I don’t remember much from the attack, it’s a black hole for me. I only remember that we arrived in Jerusalem on a Sunday morning for an educational program that was supposed to last until Friday, and it happened that morning. We were able to attend a lecture at the International Convention Center and from there we continued to Armon Hanatziv. It was supposed to be just a pick-up point, and then he (the terrorist) arrived.”

After the attack, Ofir spent five days in the intensive care unit at the Hadassah Ein Kerem Medical Center. She was later transferred to the orthopedic trauma unit, where she was cared for by Dr. Rami Moshayov, who performed a number of surgeries to reconstruct her pelvis.

Following her release from the hospital, Ofir used a wheelchair for two months. Despite the pain she endured, she did not relinquish her dream of becoming a combat fitness officer.

“I believed in myself, I worked hard at physiotherapy, four times a week,” she told Walla. “The doctors said that maybe I could become active after half a year, but I was able to run again after four months, against all odds.”