Haley tells PM that Palestinians should complain to Abbas, not Israel 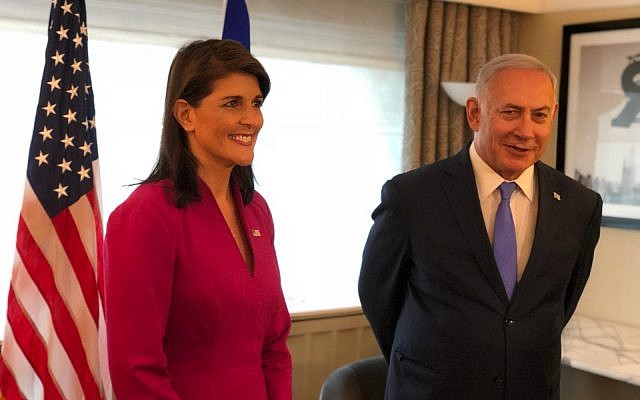 US Ambassador to the United Nations Nikki Haley said Friday the Palestinian people should complain to their own leader and not to Israel, and urged Palestinian Authority President Mahmoud Abbas to resume peace negotiations with Israel.

“We believe that the Palestinians are going to have come to the table. President Abbas is not helping the Palestinian people at all. He hasn’t acknowledged Hamas,” Haley said at a meeting with Prime Minister Benjamin Netanyahu.

Haley said she had no plans to meet with Abbas while he is in New York, where he addressed the UN General Assembly on Thursday.

“The Palestinians, if they want to blame anyone, it shouldn’t be Israel,” the ambassador said. “They should be looking at President Abbas and saying, what are you doing for us?”

Speaking to the press before their bilateral meeting, Netanyahu thanked Haley for her staunch support of Israel at various UN agencies.

“With you, it’s better,” he said, after Haley asked him how things are going, referring to her strong pro-Israel stance at the world body, which has long been anti-Israel.

The UN General Assembly Hall “still permeates with the stench” of the 1975 resolution that equated Zionism with racism, Netanyahu said.

“I want to thank you for clearing the air out of that hall,” he told Haley, hailing the US administration’s decision to withdraw from UNESCO and the UN Human Rights Council, and defunding UNRWA.