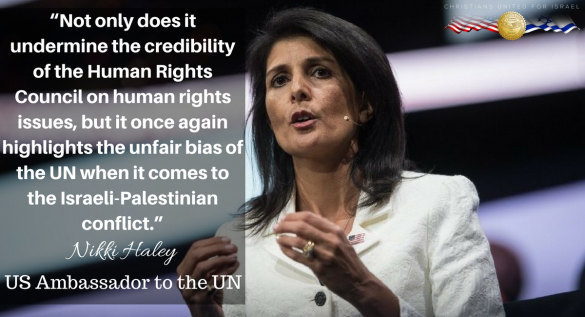 WASHINGTON — US Ambassador to the UN Nikki Haley on Tuesday slammed a report by the UN High Commissioner for Human Rights for its “unfair bias” in “singling out Israel.”

The US envoy condemned a report released just a day earlier that accused both Israel and the Palestinians for failing to probe war crimes. but focused heavily on Israel’s “repeated failure” to “comply with the calls for accountability made by the entire human rights system.”

Haley, who just last week warned the Human Rights Council in Geneva that the US might leave the body if they did not make several reforms, including changing its treatment of Israel, argued the report placed disproportionate blame on the Jewish state.

“This report is just the latest example of the Human Rights Council singling out Israel rather than focusing on the world’s actual human rights abusers,” she said.

“Not only does it undermine the credibility of the Human Rights Council on human rights issues, but it once again highlights the unfair bias of the UN when it comes to the Israeli-Palestinian conflict.”