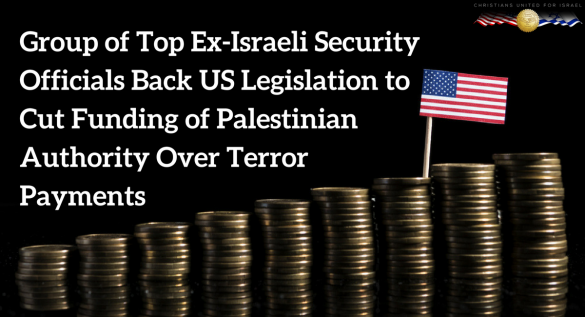 A group of former top Israeli security officials are speaking out in favor of a proposed congressional bill that would cut off American funding of the Palestinian Authority if it continues to pay monetary rewards to terrorists and their families.

In a letter that was seen by The Algemeiner, Brig. Gen. (ret.) Yosef Kuperwasser wrote that a failure to pass the Taylor Force Act would mark a “surrender to terror.”

Providing the PA with money that enables its terror payments is “illogical, illegal and immoral,” Kuperwasser said. “Most of all it’s inhuman.”

The letter — which Kuperwasser said was cosigned by ex-Defense Minister Moshe Ya’alon and ex-National Security Adviser Uzi Dayan, as well as Maj. Gen. (ret.) Gershon Hacohen and Brig. Gen. (ret.) Oded Tira — was penned in response to a missive published last week by Commanders for Israel’s Security (a group of hundreds of former Israeli security figures) that warned of potential negative consequences of the US legislation, including the harming of Israeli security.

Also, he explained, “the PA is not going to collapse because of the Taylor Force Act.”

“The real threats to the PA are its commitment to unattainable political goals and to a long-lasting struggle against Israel, instead of a genuine peace process, its low-level of functioning, the corruption and the lack of a system that guarantees popular trust in the leadership,” Kuperwasser said.