Greenblatt: Israel is the victim in the Israeli-Palestinian conflict 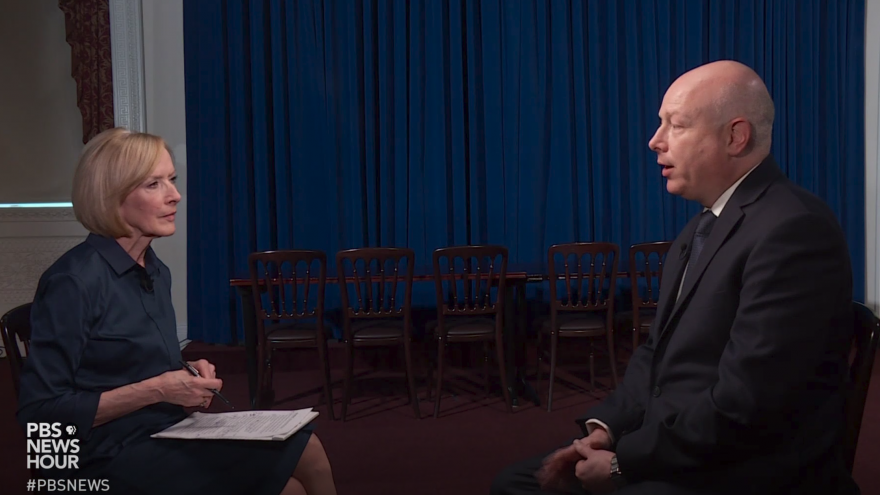 (July 18, 2019 / JNS) In an interview with Judy Woodruff for “PBS NewsHour,” U.S. Special Representative for International Negotiations Jason Greenblatt wasn’t to blame for the Israeli-Palestinian conflict, and said that the Jewish state is “trying their best … under very, very trying circumstances.”

Uploaded to the PBS website on Wednesday and broadcast on American television, the interview focused on the U.S. role in mediating its version of peace negotiations, the economic component of which was unveiled at the June “Peace to Prosperity” conference in Bahrain.

Asked what responsibility Israelis bear for the conflict, Greenblatt responded, “I think that Israel is actually more the victim than the party that’s responsible.”

“From the moment of its formation, they were attacked multiple times. They continue to be attacked with terrorism. So—I’m not sure I understand the premise of the question,” Greenblatt said.

“I think that they’re trying their best to succeed … under very, very trying circumstances.”

Greenblatt also expressed sympathy for the Palestinians. Those that conducted talks with him in private, he said, begged him not to publicize the meetings in any way.

“When they go home, they are afraid, and that’s unfortunate,” Greenblatt lamented.

Asked to list Israeli “mistakes” and “places where they have overstepped their authority,” Greenblatt said, “Nobody’s perfect, right? I can’t think of single instances,” and reiterated that “Israel is doing the best that it possibly can under very challenging circumstances.”

Greenblatt took umbrage at the interviewer’s use of the term “settlements” to describe Jewish towns in Judea and Samaria, saying that “calling it ‘occupied territory’ does not help resolve the conflict” and maintaining that the issue “needs to be resolved in the context of direct negotiations between the parties.”

“I don’t even like the word ‘settlements.’ I think it’s a pejorative term,” he said. “I use the term ‘neighborhoods’ [or] ‘cities.’”

He also said negotiations were not limited to a “two-state solution.”

“You can’t take … a conflict as complex as this and boil it down to those three words,” he said.

The first stage of the Trump administration’s plan to solve the Israeli-Palestinian conflict includes a $50 billion boost to the Palestinian economy in the form of grants, investments and loans. The political part of the plan was set to be unveiled after Benjamin Netanyahu formed a coalition following his April 9 election victory, but has been stalled since coalition talks failed, leading to a new election on Sept. 17.