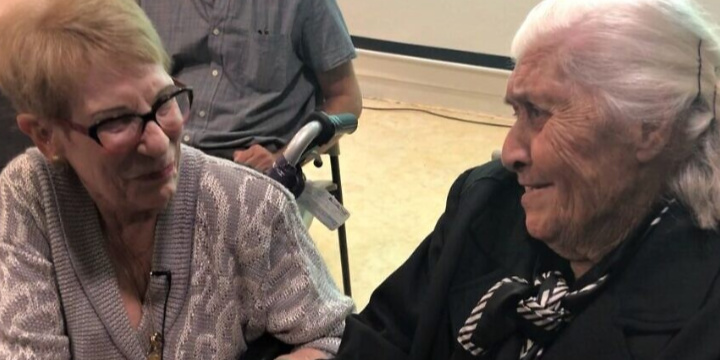 “There is no way to describe the acts of heroism and the danger they took upon themselves and all those around them to shelter an entire family,” said Sarah Yanai upon reuniting with the Greek woman who, along with her two sisters, hid her and five other members of her family during the Holocaust.

“The feeling is very emotional and very exciting. I cannot describe it,” said the 86-year-old. “What can I say? They saved our lives.”

At the Hall of Names at Jerusalem’s Yad Vashem, Greek rescuer Melpomeni Dina, 92, now living in Thessaloniki, Greece, was reunited with two survivors she saved during the Holocaust: Yanai, who now lives in Ramat Hasharon, and her brother Yossi Mor, 77, now living in Beersheva.

Melpomeni Dina (then Gianopoulou) was just 14 when she and her two orphaned sisters, Efthimia and Bithleem, decided to hide the Jewish family in their home

For more than two years, they hid and provided for the Mordechai family, including Sarah and Yossi; their parents (Mentes and Mari); and siblings Asher, Shmuel, and Rachel. Due to the heroism and sacrifice of the Gianopoulou sisters, most of the family survived the war.

According to Yad Vashem, Gianopoulou’s connection to the Mordechai family was through Melpomeni’s sister, Efthimia (married name Xanthopoulou), who before the invasion of Greece had studied to become a seamstress at Mari Mordechai’s studio in Veria. Since Efthimia was an orphan and very poor, Mari did not charge her for the lessons.