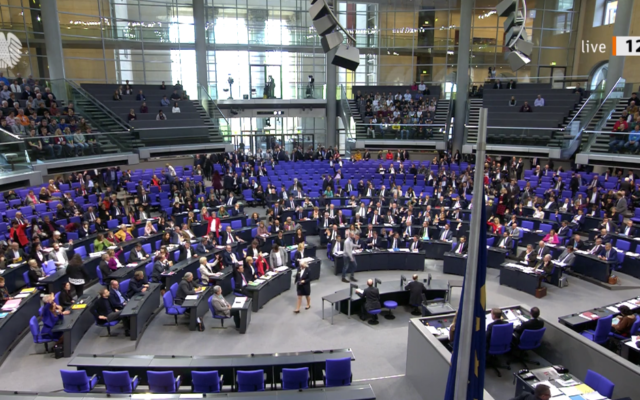 The German parliament on Thursday passed a resolution calling on the government in Berlin to outlaw activities of the Iranian-backed, Lebanese terrorist organization Hezbollah.

The nonbinding motion was supported by the two major parties that make up Germany’s ruling coalition, as well as by a small opposition party called FDP, thus passing with a large majority. The other three parties in the Bundestag abstained. No one voted against the resolution.

During the debate some critics noted the resolution was effectively less than a ban of the organization.

Two opposition parties — the Greens and the far-right Alternative for Germany — proposed their own resolutions on Hezbollah, which both failed to pass.

The resolution that passed called on the government to “decree an activity ban against Hezbollah in order not to tolerate any activity in Germany by representatives of the organization, which opposes the principle of international understanding.”

It further urges Berlin to abandon the distinction it currently draws between a political and a military wing of Hezbollah.

“We welcome the important and significant resolution adopted today by the Bundestag, which relates to Hezbollah for what it is: a terrorist organization, with no distinction between its military and ‘political’ wings,” Israel’s Ambassador to Germany Jeremy Issacharoff told The Times of Israel.

“Hezbollah is indoctrinated, trained and financed by Iran and poses a threat not only to Israeli civilians, but also undermines Lebanese sovereignty and regional stability. As the resolution indicates, it poses a direct threat to German and Israeli security interests.”

Issacharoff said Jerusalem appreciates the fact that this motion was supported by MPs from both government and opposition parties. “Foreign policy should reflect reality and the Bundestag’s resolution is clearly a crucial step that we hope will encourage others to take similar action against Hezbollah,” he said.

Germany’s Foreign Minister Heiko Maas referred to the resolution on Thursday morning, though he stopped short of explicitly endorsing its call for a prohibition of the organization.

“Hezbollah denies Israel’s right to exist, threatens and is arming itself massively. In Syria, it’s [President Bashar] Assad’s brutal assistant,” he tweeted several hours before the vote took place. “In Germany we must exhaust all means of the rule of law to confront Hezbollah’s terrorist and criminal activities.”

Currently, Berlin adheres to European Union policy, which recognizes the group’s “military wing” as a terrorist organization but refuses to apply the same label to its “political branch.”

However, the Netherlands and the UK already recognize the organization in its entirety as a terrorist organization. In that context, the US administration has been pushing for Berlin to follow suit.

“Today is a good day for Jewish life in Germany,” said Benjamin Strasser, who authored the draft. The Bundestag will pressure France to give up its traditional opposition to a European-wide ban of Hezbollah, he added. “Am Yisrael Chai [the people of Israel lives]. Merry Christmas, happy Hannukah,” he concluded his brief speech.

“It’s unacceptable that Hezbollah is waging a terror war against Israel in the Middle East and financing this through worldwide criminal activities,” said Mathias Middelberg, a spokesperson for Chancellor Angela Merkel’s CDU faction in the Bundestag.

“In light of Germany’s responsibility toward Israel, we urge the federal government to prohibit any Hezbollah activity in Germany. Violations must be punished forcefully.”

According to Thursday’s Bundestag resolution, which was drafted by 32-year-old lawmaker Benjamin Strasser from the pro-business FDP, about 1,000 Hezbollah supporters presently live in Germany, noting that the number has recently increased. It calls on the government to “closely observe and prosecute with all legal means” their activities, including money laundering and the sponsoring of terrorism.

It also demands that Berlin continue to actively advocate for Israel’s legitimate security concerns as a “central pillar of German foreign and security policy” and work with international partners to “push back against Hezbollah’s influence in the region, especially in Syria.”

In its preamble, the resolution quotes Germany’s domestic intelligence service estimating that Hezbollah “continues to plan and execute acts of terrorism against Israel or Israeli interests, also outside the Middle East.” Berlin’s commitment to Israel’s security requires an effort to prevent Germany from being a channel to funnel money to Hezbollah in Lebanon, the resolution states.

It also reiterates Merkel’s dictum that Israel’s security is part of Germany’s raison d’etat. Citing the country’s history, the motion’s introductory text also asserts that Germany has a “special responsibility toward the Jewish and democratic State of Israel.” It calls upon the government to “confront actors in the Middle East that question Israel’s right to exist and openly threaten its security.”

The text also reiterates Berlin’s commitment to a two-state solution: “a Jewish and democratic state of Israel in secure borders, and an independent, democratic and viable Palestinian state.”

The motion’s passing was welcomed by ELNET, a nonprofit dedicated to strengthening Europe-Israel relations.

“The resolution is an important milestone in safeguarding Jewish life in Germany, fighting extremism and anti-Semitism, while ensuring Israel’s security and countering terrorism,” the group said in a statement. “The large majority which adopted this resolution sends a strong message of resolve against Hezbollah and Iran’s aggression.”

Last month, leading German news magazine Der Spiegel reported that the German government has already decided to outlaw Hezbollah. According to the magazine, the move has been coordinated by the foreign, interior and justice ministries in Berlin. However, a spokesperson for the interior ministry immediately denied the report.

According to Der Spiegel, the move would effectively ban all Hezbollah activities on German soil, including the waving of its yellow flag, which controversially has been shown during pro-Iranian and anti-Israeli demonstrations in Berlin.

In June, the German parliament first discussed, but ultimately rejected, the idea of outlawing Hezbollah. At the behest of the Alternative for Germany, or AfD, the Bundestag debated a nonbinding resolution calling on the government to “examine whether the conditions exist for a ban on Hezbollah as one organization, and, if necessary, to issue such a prohibition and implement it immediately.”

The resolution was rejected, with lawmakers from the ruling coalition saying they need to further investigate the matter.

On Thursday, the AfD abstained on the resolution that passed, denouncing it as a “watered-down version of the bill” the party had submitted in June.

“Due to our constant pressure, the Merkel government has been forced to react. The result is a totally ineffective version, which still falls short of a ban on this terror group. Hezbollah membership will still be legal in Germany,” said Petr Bystron, a lawmaker from the AfD.

Hundreds of anti-Israel protesters, among them supporters of Hezbollah, annually participate in Berlin’s al Quds-Day demonstration. At a counter-demonstration this year, Jewish community officials and the city’s top security official, Andreas Geisel, called on the federal government to outlaw Hezbollah in its entirety.

Hezbollah flags have been banned from the event for several years, though they have been seen flashed by supporters occasionally.