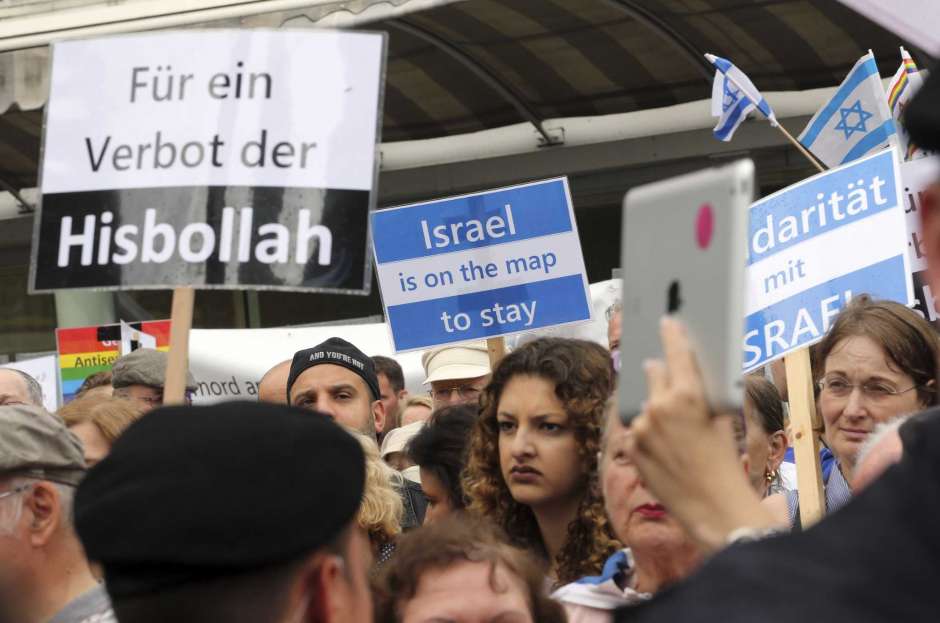 BERLIN (AP) — Germany’s parliament passed a resolution Thursday calling for a national ban on the activities of Hezbollah and for the Lebanese militant group to be put on the European Union’s terrorist list.

Mathias Middelberg, the spokesman for Chancellor Angela Merkel’s conservatives in parliament, said the joint resolution was agreed upon with the junior coalition Social Democrats, as well as the opposition Free Democrats.

“It is unacceptable that Hezbollah is waging a terrorist fight against Israel in the Middle East, which is being financed through worldwide criminal activities, among other things,” he said in a statement. “In view of Germany’s special responsibility toward Israel, we call on the government to ban all activities for Hezbollah in Germany.”

“The separation between a political and a military arm should be abandoned, and Hezbollah as a whole should be placed on the EU terrorist list,” Middelberg said. “This could freeze Hezbollah’s funds and assets in Europe more extensively than before.”

However, other member nations have opposed broadening the scope of the EU’s Hezbollah ban.

Israel welcomed the decision by German parliament, known as the Bundestag, and said it hoped the move would encourage other European countries to take similar steps.

“The Bundestag’s resolution is an important step in the international struggle against terrorism, particularly against terrorist organization Hezbollah and its patron Iran,” said Israeli Foreign Minister Israel Katz.

The parliamentary resolution in Germany was approved with a majority show of hands by members of Merkel’s bloc, the Social Democrats and the Free Democrats. Other parties represented in the German legislature all abstained.

The Left Party said it could not vote for the resolution because adding Hezbollah to the EU terrorist list could complicate relations with Lebanon. Members of the Greens said they agreed with almost all of the resolution but objected to a point that they said could lead to “military intervention” in the Mideast.

Johann Wadephul, a lawmaker with Merkel’s Christian Democrats, offered assurance that the resolution’s call for measures to reduce the influence of Hezbollah in the region, particularly in Syria, did not foresee military action.

“But we are all called upon to isolate Hezbollah internationally,” Wadephul told fellow lawmakers. “They threaten Israel, they threaten the peace process in the Mideast and therefore we must confront Hezbollah.”

It was not immediately clear whether the resolution would prompt the government to pursue the ban of Hezbollah’s activities. But with the governing parties and most of the opposition on board, such action seemed likely.

Several lawmakers noted that a ban would allow authorities to prevent Hezbollah supporters from staging an annual anti-Israel march in Berlin.

Britain banned Hezbollah in March following moves of other nations, including the Netherlands, the United States and Canada.

The German resolution comes as the U.S. has been increasing its pressure on Hezbollah, placing several sets of sanctions on the group and its regional backer, Iran.

In Berlin, U.S. Ambassador Richard Grenell applauded the resolution approved Thursday, saying “we stand ready to support the government’s implementation of a ban.”

German Foreign Minister Heiko Maas acknowledged that with Hezbollah’s ties to Lebanese government “the political reality in Lebanon is complex,” but he said “this should not prevent us from exhausting the legal possibilities in Germany to tackle Hezbollah’s criminal and terrorist activities.”

Israel and Hezbollah fought a month-long war in 2006 that ended in a U.N.-brokered cease-fire. While direct fighting has been rare since then, there has been occasional violence, most recently on Sept. 1 when Hezbollah fired a barrage of anti-tank missiles into Israel and Israel responded with artillery fire.

The barrage was fired in retaliation to an Israeli airstrike inside Syria which Hezbollah said killed two of its members. It also followed an incident in which two Israeli drones crashed in a Hezbollah stronghold in south Beirut.

Israel maintains Hezbollah has amassed an arsenal of some 130,000 rockets and missiles capable of striking virtually anywhere in Israel. More recently, it has accused the group of trying to import or develop guided missiles.

Last December, Israel announced that it had uncovered a network of tunnels that it said Hezbollah was building with the aim of infiltrating and carrying out attacks. Israel said it systematically destroyed the structures.

Hezbollah has not commented on the tunnels, though the U.N. peacekeeping force UNIFIL has said the group violated the 2006 ceasefire.

Josef Federman in Jerusalem contributed to this story.