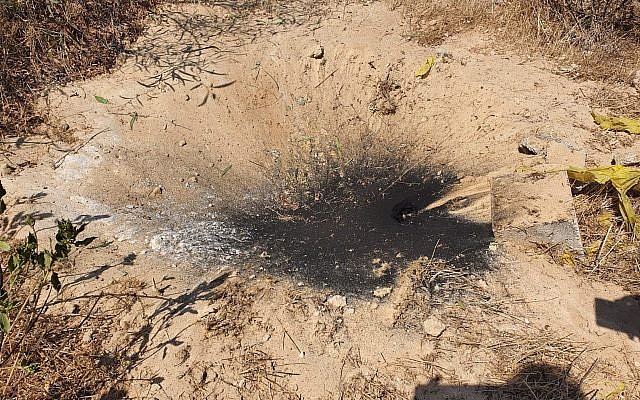 Three rockets were fired toward Israeli communities north of the Gaza Strip on Wednesday afternoon, in the second such attack from the Palestinian enclave in as many days, the army said.

One of the projectiles struck inside an Israeli community, causing light damage to a home. The other two appeared to have landed in open fields. There were no reports of injuries, according to the Magen David Adom ambulance service.

“An IDF tank attacked two military posts belonging to the Hamas terror group in the northern Gaza Strip. This attack was carried out in response to the rocket launches at Israeli territory,” the army said in a statement.

Palestinian media reported that several people were injured in the Israeli retaliatory strike, but that was denied by the Strip’s Hamas-run health ministry, which said that there were no casualties.

The rocket attack triggered sirens in the communities of Netiv Ha’asara and Yad Mordechai, sending hundreds of residents running to bomb shelters.

One rocket struck inside a community in the Hof Ashkelon region of southern Israel. Fragments of the projectile hit a home, breaking one of its windows, according to a spokesperson for the region.

A police sapper was called to an agricultural field in the Hof Ashkelon region to remove one rocket that landed there. The third impact site was not immediately located.

In the predawn hours of Wednesday morning, the Israeli Air Force launched strikes on 15 targets belonging to the Hamas terror group, which rules the Gaza Strip, in response to an attack earlier in the night in which terrorists fired two rockets at the southern cities of Ashkelon and Ashdod, where Prime Minister Benjamin Netanyahu was holding an election rally.

Palestinian sources reported heavy strikes and explosions in Beit Lahiya just north of Gaza City, Deir el-Balah in central Gaza and in Khan Younis in the south. There were no reports of injuries.

The IDF reprisal strikes came after Netanyahu, who is also defense minister, met with army chiefs, along with the heads of the Mossad and the Shin Bet security agency, at the military headquarters in Tel Aviv

Netanyahu was forced to seek shelter during the campaign event in Ashdod on Tuesday night as rocket sirens went off. Both rockets were intercepted by the Iron Dome air defense system, according to the Israel Defense Forces.

Israeli analysts said it appeared that Gaza terrorists deliberately targeted the southern cities, knowing that Netanyahu and other politicians were holding rallies there. Netanyahu’s rally was announced in advance and was live-streamed on his Facebook page.

Most recent rocket fire from the Strip has targeted surrounding communities, only firing at large Israelis cities during major flareups or if trying to provoke a heavy Israeli response.

One woman, 46, in Ashdod was treated for anxiety after failing to reach shelter, medics said, but no other injuries or damage were reported.

Netanyahu — who bills himself as “Mr. Security” — was widely panned by his political rivals for being forced offstage by a gaggle of security guards as the sirens sounded.

In nearby Ashkelon, Blue and White MK Gabi Ashkenazi had to cut a campaign event short due to the rocket fire. The city opened its public bomb shelters after the sirens went off as a precautionary measure in case rocket attacks persisted.

Netanyahu warned Hamas on Saturday that Israel would respond forcefully to any attempt to harm its citizens and soldiers, following two days of violent incidents on and near the Gaza border.