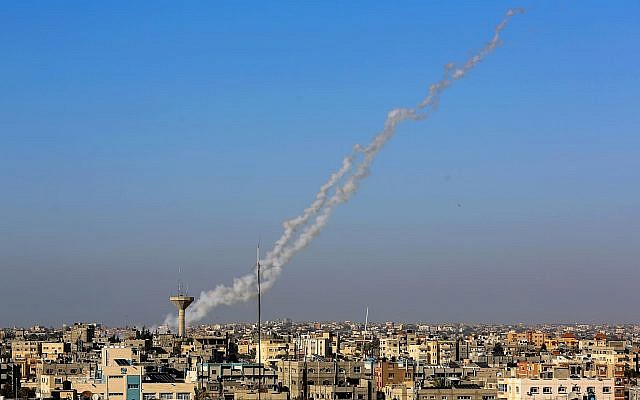 Incoming rocket sirens sounded Thursday evening in southern Israeli communities, with the military confirming that one rocket had been launched from the Gaza Strip by Palestinian terrorists.

Reports said the rocket landed in an open field. There were no reports of injuries or damage.

The Iron Dome air defense system was activated and an interceptor projectile was launched, the army said in a statement.

The IDF said a tank and fighter jets subsequently launched retaliatory strikes on two posts in the northern Strip belonging to the Hamas terror group, which rules Gaza. The Gaza-based Shehab news agency reported that Israeli security forces had fired at a jeep belonging to operatives in the border area, near Beit Lahia.

The rocket alarms were triggered in the communities of Be’eri and Alumim in the Eshkol region, just east of the Gaza Strip.

Residents of the communities reported hearing a loud explosion shortly after the rocket sirens began to blare.

The Israel Defense Forces said it was investigating the incident, including whether Iron Dome had been activated by mistake for the second time in a week.

After the launch, the Gaza-based Shehab news agency reported that Israeli security forces had fired at a jeep belonging to operatives in the border area near Beit Lahia.

Last Thursday, Israeli troops unnecessarily fired at least two Iron Dome interceptor missiles, apparently after misidentifying two rocket launches from the Gaza Strip that were directed out to sea as heading toward Israel.

On Sunday, rocket sirens sounded in the community of Kibbutz Erez, just north of the Gaza Strip, in another false alarm.

On Tuesday, Israeli fighter jets shot down a drone that was flying at an “irregular altitude” over Gaza, the IDF said.

Judah Ari Gross and Adam Rasgon contributed to this report.