Former Secretary of State Colin Powell: America’s Support for Israel Has Never Wavered and Never Will 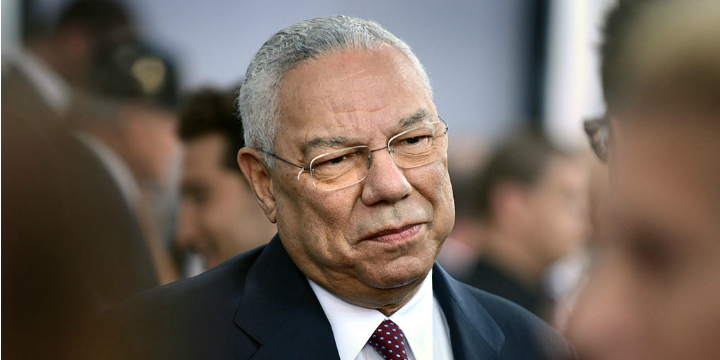 Former US Secretary of State Colin Powell was honored on Wednesday by the World Jewish Congress with its annual Theodor Herzl award at a dinner in New York City.

“The vision and prophecy of Theodor Herzl has become real so many years after his death,” the 80-year-old Powell — a retired four-star general who served as chairman of the Joint Chiefs of Staff during the First Gulf War — said at the event. “And America’s dedication, America’s alliance and America’s support of the democratic State of Israel has never wavered and never will.”

Powell — the son of Jamaican immigrants — fondly recalled his childhood in the Bronx, where he had many Jewish neighbors.

“I proudly served as a Sabbath goy,” Powell said, drawing laughter from the crowd.

He also remembered the “joy throughout the neighborhood” when Israel’s independence was declared in May 1948, when Powell was 11.

“Tears flowed, celebrations everywhere, it wasn’t just the Jews who were celebrating, the rest of us were celebrating for the Jews,” he said. “We all shared in their joy, the joy of having a homeland.”

Later in his life, Powell went on to say, “I came to know and admire fellow soldiers in the Israel Defense Forces. I came to understand the commitment of blood we had with Israel. I was a student of the wars of 1948, 1956, 1967 and 1973. And an American professional soldier, I marvel at the professionalism and successes of the Israel Defense Forces.”

While secretary of state during President George W. Bush’s first term, Powell tried — ultimately unsuccessfully — to advance the Israeli-Palestinian peace process. On Wednesday, he recounted his last meeting with Yasser Arafat in Ramallah in 2001, at which, Powell said, the late Palestinian leader lied to him.

Arafat, in Powell’s view, “led a movement, but could not politically lead a people or a nation.”

Regarding the still unresolved Israeli-Palestinian conflict, Powell said, “The quest for peace, however difficult, must not be abandoned. Israel needs to live in peace and security. The Palestinians need the same, as does the region.”