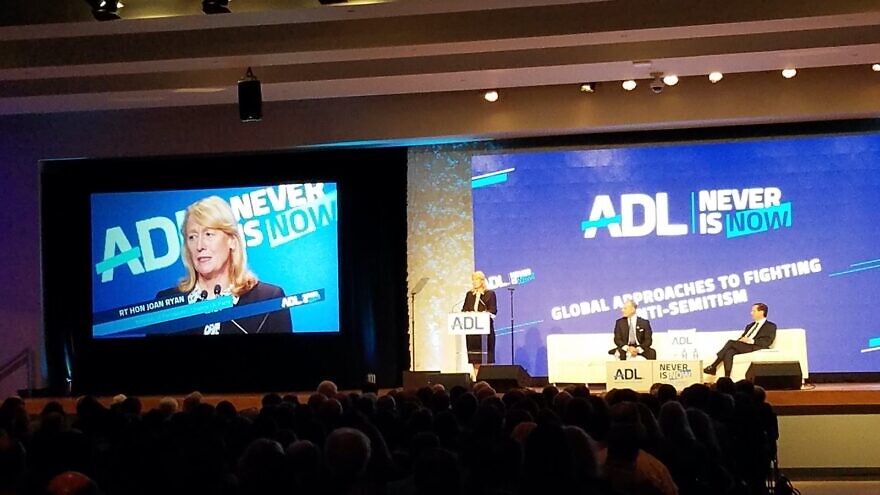 (November 21, 2019 / JNS) A former British Labour MP denounced the party for being “institutionally anti-Semitic” and its leader, Jeremy Corbyn, as unfit to be Britain’s next prime minister during her speech Thursday morning at the Anti-Defamation League’s “Never Is Now” summit.

Joan Ryan left the Labour Party in February, after being a member for more than 40 years, citing its tolerance of a “culture of anti-Jewish racism.”

A recent poll showed that a significant 87 percent of British Jews consider Corbyn to be an anti-Semite.

Ryan referenced that statistic on Thursday, noting that since Corbyn became leader of the party four years ago, “Jewish MPs have been bullied out of the party, Jewish members have been abused, harassed and threatened, and anti-Semitism has been curled up, dismissed and ignored.”

“I could not remain in such a party. And I could not, and will not, campaign for Jeremy Corbyn to become Britain’s next prime minster,” Ryan adding, referring to the upcoming elections on Dec. 12.

Speaking about the current anti-Semitic climate in the party, she said, “too many people in the Labour Party believed it was just a case of a few bad apples for far too long. By the time Labour became institutionally anti-Semitic, it was far too late to root out the Jew-haters.

“We should have been saying from the onset that Corbyn’s hatred of Israel was repugnant, and that his tolerance of anti-Semitism, his past associations with Holocaust deniers, Jew-haters and terrorist-sympathizers made him unfit to be Britain’s prime minister.”

Ryan stressed the need to “set clear red lines” that people are not willing to compromise on when it comes to tackling the issue of anti-Semitism and anti-Zionism.

She told the audience the fight will not be easy, but that “should not prevent us from saying clearly that those who single out the world’s only Jewish state for criticisms and who deny the Jewish people alone the right to self-determination are anti-Semites, pure and simple. And if you claim to oppose anti-Semitism but will never speak up for Israel, you are not a true ally.”

Ryan concluded her speech by urging Israel supporters to help “build a wider case” of why anti-Semitism matters, and affects both Jews and non-Jews. She called anti-Semitism “a threat to free society,” and added “it weakens democracy and erodes the bonds which hold societies together. We must resist it at all costs, in all places and at all times.”