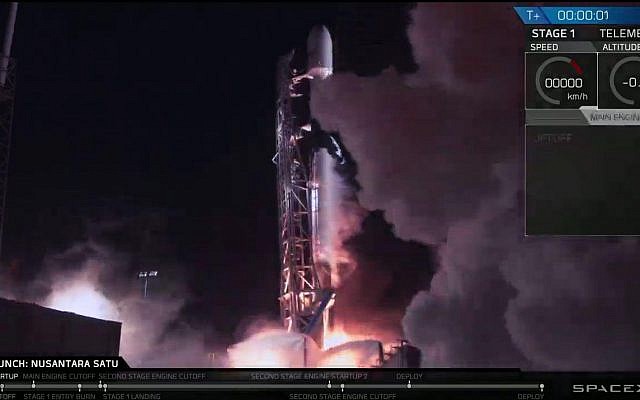 Ground control activated the spacecraft’s main engine for four minutes, putting it into a new orbit which takes it to a distance of 131,000 kilometers from earth. The next maneuver is scheduled for next week.

“The maneuver was conducted as expected. All the systems of the spacecraft worked properly,” said Ido Anteby, CEO of SpaceIL. “We are on our way to the moon.”

The craft has also broken an Israeli speed record, traveling at 10.5 kilometers per second, said Opher Doron, general manager of the space division at IAI.

The four-legged Beresheet, barely the size of a washing machine, will circle Earth in ever bigger loops until it’s captured by lunar gravity and goes into orbit around the moon instead. Touchdown is planned for April 11 at the Sea of Serenity.

On Monday evening a hitch in computer systems caused the spacecraft to miss a scheduled adjustment in its trajectory en route to the moon, engineers reported.

The maneuver by the Beresheet craft was postponed after the space vehicle’s on-board computer executed an independent restart. As a result, the craft automatically canceled an engine burn scheduled to keep it on track for an April lunar landing.

“We managed to find our way around several problems that we had these last few days. It’s quite normal for a new spacecraft to have some teething problems in its first days and we’ve overcome them all. The moon seems to be getting within reach,” Doron said.