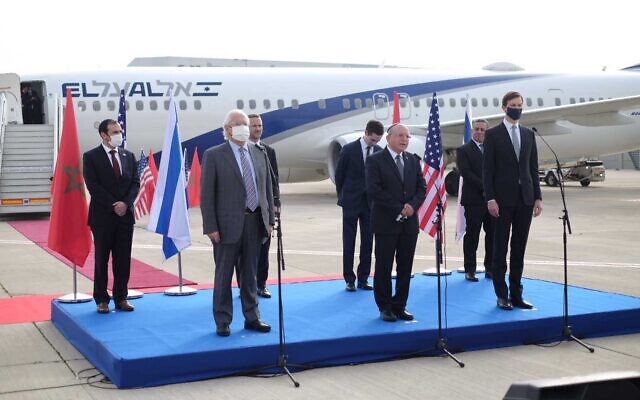 The first flight from Israel to Morocco took off on Tuesday morning for a whirlwind trip by a joint Israeli-American delegation that will include the signing of several bilateral and trilateral agreements.

National Security Adviser Meir Ben-Shabbat, who is leading the trip on the Israeli side, said these would include agreements on aviation, tourism, health, water, agriculture and other issues.

Ben-Shabbat, the son of Morocco-born parents, said peace is “breaking out before our eyes.” He made his remarks on the tarmac, in front of the plane, which was painted with a hamsa symbol, a hand image popular as a good luck symbol in both countries.

The flight from Tel Aviv to Rabat is seen as highly symbolic after Morocco announced on December 10 a “resumption of relations” with Israel.