Finds in Jerusalem shore up biblical account of Babylonian conquest 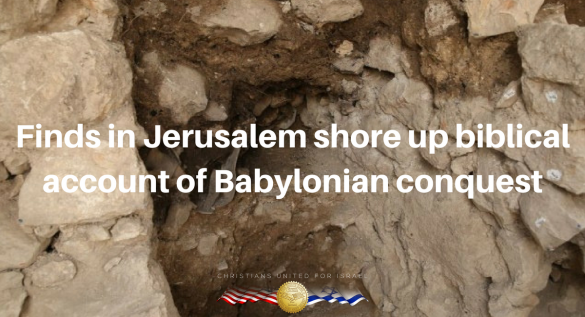 New finds in the City of David confirm the veracity of the biblical account of the Babylonian capture and conquest of First Temple period Jerusalem. The event is commemorated next Tuesday on the Hebrew date Tisha B’av (August 1) in a day of fasting and mourning, Israeli experts said.

According to Israel Antiquities Authority archaeologist Dr. Joe Uziel, co-director of the current excavations at the City of David, findings discovered in the site’s eastern slope, including a row of 2,600-year-old rooms and their contents — all covered with visible layers of charcoal ash — aid in understanding the days leading up to and the act of the destruction.

Within the collapsed rooms were uncovered rare artifacts, including a unique, apparently Egyptian, ivory statue of a nude woman, and smashed pottery jars with a rosette seal which was in royal use during the final decade before the fall of the First Temple, according to co-director Ortal Chalaf.

“These seals are characteristic of the end of the First Temple period and were used for the administrative system that developed towards the end of the Judean dynasty. Classifying objects facilitated controlling, overseeing, collecting, marketing and storing crop yields. The rosette, in essence, replaced the ‘For the King’ seal used in the earlier administrative system,” said Chalaf.

Additionally, charred remains of wood, grape seeds, and fish scales and bones will be carbon dated by members of the interdisciplinary cooperative team of Israel Antiquities Authority archaeologists and Weizmann Institute scientists Elisabetta Boaretto and her postdoctoral fellow Johanna Regev, who were present at the dig site.