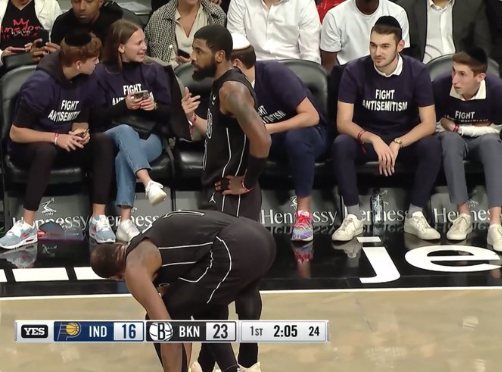 According to the New York Post, the group heckled Irving throughout the game, and in return, he gave them a thumbs up and said he was “thankful for you guys.”

A group of Jewish protestors was spotted at Monday’s Nets game sitting courtside with T-shirts that read “Fight Antisemitism.” They were responding to Kyrie Irving‘s recent support of the film, Hebrews to Negroes: Wake Up Black America, which purportedly promotes antisemitism and general misinformation.

Written, directed and produced by Ronald B. Dalton Jr., the film is based on a book of the same name that he wrote. The author-turned-director openly holds beliefs in line with the Black Hebrew Israelite movement, defined by the Anti-Defamation League as “a fringe religious movement that rejects widely accepted definitions of Judaism and asserts that people of color are the true children of Israel.”