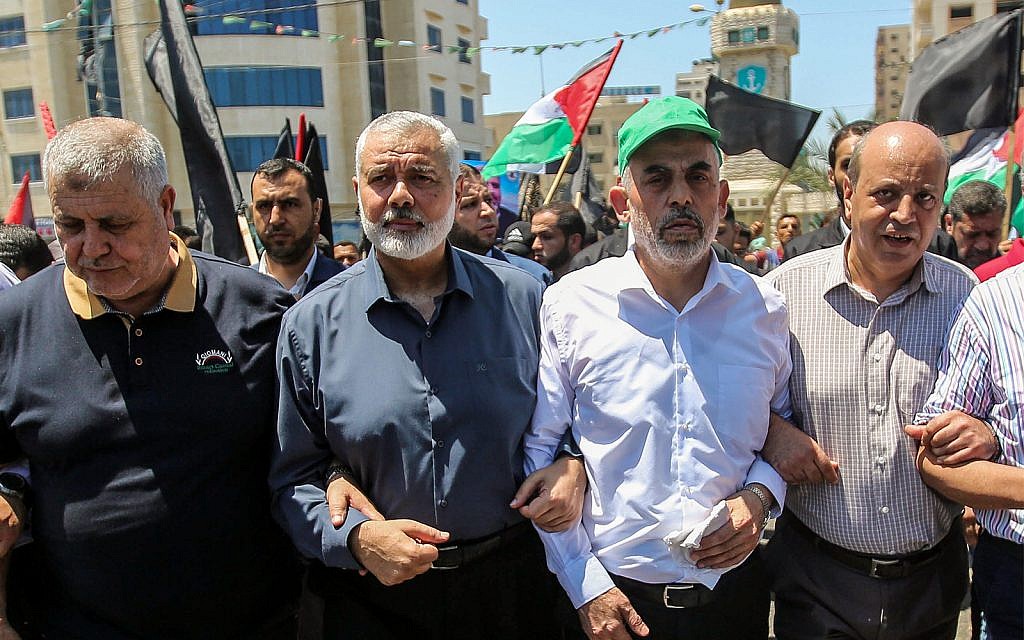 Hamas’s leadership in the Gaza Strip, under Yahya Sinwar and Ismail Haniyeh, is currently aiming for an arrangement that will ensure calm with Israel, in order to generate economic progress that will improve the situation in the Palestinian territory, Jerusalem believes.

The Israel Defense Forces have assessed that senior figures in the terror group, the de facto ruler in Gaza, have concluded that conditions are ripe for a broader arrangement with Israel, in the wake of the army’s Operation Black Belt, which began with the targeted killing on November 12 of senior Palestinian Islamic Jihad terror commander Baha Abu al-Ata.

Ata was a thorn in the side not only of Israel, but also of Hamas, as his operations against Israel frequently derailed the group’s efforts to stabilize conditions in the beleaguered enclave.

According to military assessments, Sinwar, the head of Hamas’s political bureau in the Strip, is leading the conciliatory line of thinking and is interested in attaining significant economic achievements, by way of an arrangement with Israel.

Military leaders are of the opinion that Hamas’s decision to refrain from holding protests along the Israel-Gaza border over the past three weeks, in a departure from its previous policy, is a sign of the calming messages it is seeking to send to Israel. The IDF views this as a positive development.

In the army’s view, current conditions could enable progress towards a broader calm that would include certain Israeli gestures, among them giving several thousand new permits for workers to enter Israel; establishing a new industrial zone near the Karni border crossing; and setting up a new electricity line that would significantly improve the supply to power-strapped Gaza.

Israeli sources claim that Hamas has been working for months to rein in the PIJ, but has not always been able to do so. The sources say that Hamas has become a stabilizing force in Gaza, while the PIJ is trying to undermine it.

A new hospital was recently established in the northern Gaza Strip near the Erez border crossing, which is intended to serve Gaza residents, and which was funded by an American group called, “Friendship.”

The hospital was set up on the ruins of the Erez industrial park, which, prior to Israel’s 2005 Disengagement from the Strip, employed thousands of Gaza residents. Thanks to its funding by a US group, the hospital has been dubbed “The American Hospital.” It has been currently causing considerable media and political upheaval between Hamas and its Fatah rival in the West Bank-based Palestinian Authority, around the latter’s suspicion that Hamas was becoming a legitimate partner for outside forces.

On Saturday, PA Minister for Civil Affairs Hussein al-Sheikh claimed during an interview that the fact that Hamas allowed establishment of an “American” hospital in the Gaza Strip testifies to the terror group’s cooperation with the United States. This statement, which has no real basis in reality, understandably drew responses from Hamas. On Sunday morning, for example, Hamas spokesman Sami Abu Zuhri said Fatah’s leaders should stop receiving treatment in Israeli hospitals before it complains against setting up “American” hospitals.

Indeed, there are few senior figures in the PA or Fatah who have not undergone one treatment or another in Israel or by Israeli doctors, including PA President Mahmoud Abbas and Hussein al-Sheikh himself.

But it seems that the Gaza hospital itself is not real cause for the assault by Sheikh and his allies.

Rather the minister, like the rest of the PA leadership, are viewing with great concern the reports on plans for a broad agreement between Israel and Hamas. For instance, reports that Israel’s new Defense Minister Naftali Bennett gave an order for a feasibility study for setting up an artificial island opposite the Gaza coast, where a port would serve the Palestinian enclave, grabbed headlines in several Palestinian media outlets.

Bennett’s action was criticized by the PA, which claimed that it was only Israel’s first step towards a plan to completely separate the West Bank from Gaza where a Palestinian “state” would be established while Israel would maintain its presence in East Jerusalem and the West Bank.

It should be noted that the PA is also not keenly working to tighten ties with the Strip. In recent months, the government in Ramallah has raised just about every possible objection to the notion of funding projects that would improve the quality of life in Gaza, or even medical treatment for the residents of the Strip.

It is likely that setting up the hospital in the area of Erez, along with the construction of another medical center in the area of Rafah, would ease, to some extent, the dire state of medical facilities in Gaza. Many Gaza residents require treatment in more advanced hospitals than those available in the Strip, but due to security restrictions they cannot go to hospitals in the West Bank, Jerusalem, or even Jordan.