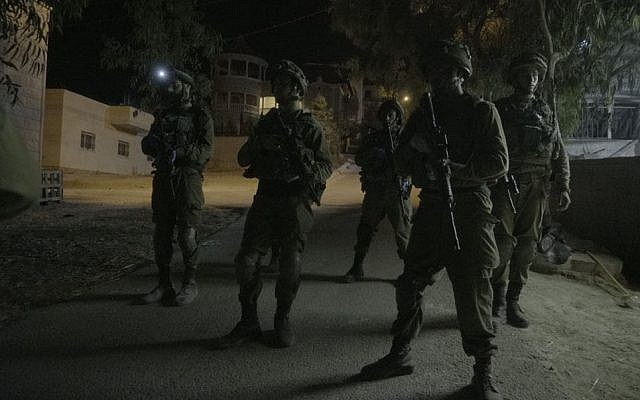 An explosive device was detonated next to an Israel Defense Forces position near the town of Beit Ummar in the West Bank on Friday evening, the military said in a statement.

A second device was discovered at the army post and was neutralized by sappers.

There were no reports of any injuries in the primary explosion but there was damage to the military structure.

During a search for further suspects close to Beit Ummar, clashes broke out in which one IDF soldier was lightly wounded. The soldier was taken to hospital for medical treatment.

The IDF said troops used crowd dispersal methods. No further details were given and there were no reports of Palestinian injuries.

Israeli security forces early on Thursday arrested a senior member of the terror group suspected of being behind a bombing attack outside the Dolev settlement in August that killed Israeli teenage girl Rina Shnerb and seriously injured her father and brother, Palestinian media reported.

Last weekend the Shin Bet revealed that it had arrested several members of the PFLP cell suspected of carrying out the deadly bombing attack at the Ein Bubin natural spring. A short time later, it was reported that the alleged head of the cell, Samer Arbid, had been taken to Jerusalem’s Hadassah Hospital Mount Scopus in critical condition following his interrogation by the Shin Bet.

Arbid showed signs of improvement on Wednesday, but remained in critical condition, according to his lawyer.

Mahmoud Hassan told the Ofer military court that his client Arbid was still attached to a ventilator at Hadassah Hospital with severe internal injures, including broken ribs and kidney failure.

Hassan petitioned the court for Arbid’s release due to his injuries, arguing that his client had “undergone severe torture” while in Israeli custody, according to Hebrew media reports.

The court denied the request, and ruled that due to the improvement in Arbid’s condition, the Shin Bet would likely be able to resume interrogating him “in the coming days.”