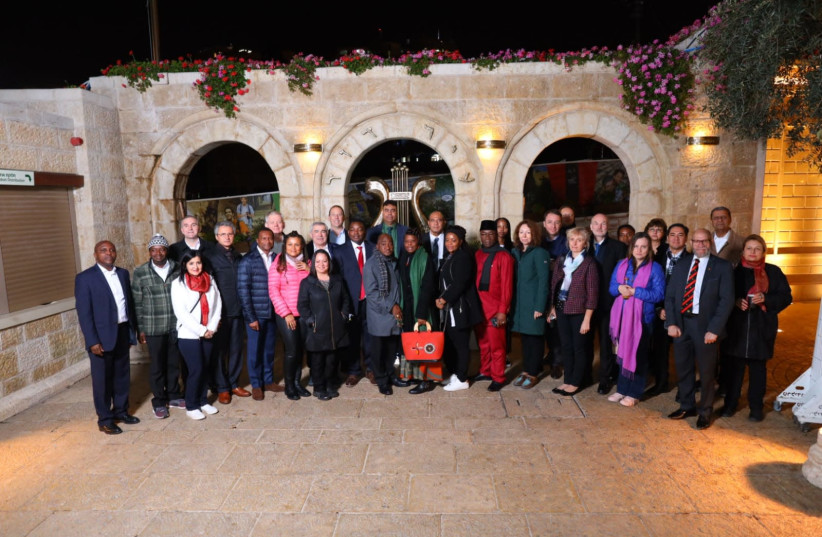 Israeli Ambassador to the United Nations Danny Danon brought “dozens” of UN ambassadors as guests with him to visit the City of David to demonstrate the Jewish’s peoples ancient roots in Israel in front of the world leaders Wednesday afternoon.

Danon lead the group of diplomats through the city to tour the three-thousand-year-old archaeological excavations being conducted in ancient Jerusalem and the recently uncovered Pilgrimage Road in Silwan.

“I brought dozens United Nations Ambassadors here to the City of David; to see where it all began. Three-thousand years ago, this is where King David established his capital city,” Danon said. “The land of Israel is our ancestral homeland and Jerusalem is our eternal capital. We will continue to bring United Nations Ambassadors and diplomats here to the City of David, because there is nowhere better on earth to demonstrate the Jewish people’s ancient roots in this land.”

The City of David is Israel’s largest active archaeological site, with over half-a-million visitors touring the city each year to visit the biblical sites in order to stand where the stories of the bible were purported to have taken place in, the national heritage site is “rich with significance to Jews and Christians alike.”

“We are privileged to welcome Ambassador Danon and United Nations Ambassadors from around the world to the City of David. While walking on the same ancient stones that our ancestors walked upon three-thousand-years-ago, the ambassadors will be presented with the historic evidence that the most ancient people on earth living in their ancient recorded capital are the Jews in Jerusalem,” said Vice-President of City of David Foundation Doron Spielman.

“We hope that this in turn will encourage the ambassadors to stand for truth, the truth of the rights of the Jewish People to Jerusalem and to the State of Israel,” the vice president of the foundation concluded.