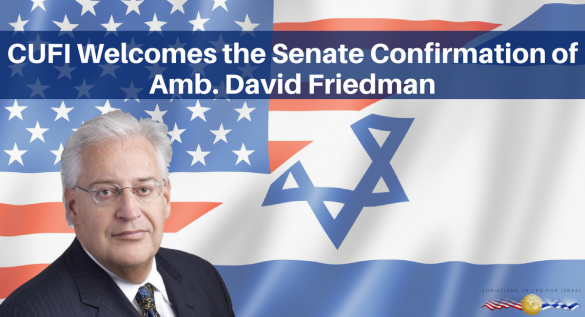 SAN ANTONIO – On Thursday, Christians United for Israel (CUFI), the nation’s largest pro-Israel organization, welcomed the Senate’s confirmation of David Friedman to serve as the next US Ambassador to Israel. Supporting the Friedman nomination was a top priority for the Christian Zionist group.

CUFI’s effort began with the organization’s public policy arm, the CUFI Action Fund, hosting a mid-January fly-in during which nearly 300 pro-Israel leaders from across the country lobbied their senators in support of the nomination. CUFI then followed this event with a February action alert generating nearly 30,000 emails to senators in support of the Ambassador-designate and ran full-page ads in The Washington Post, Roll Call and The Hill, urging senators to support the nomination.

“CUFI is very pleased the Senate has confirmed David Friedman to be the next US Ambassador to Israel. He is the President’s choice and is the right man for this extremely challenging post. We look forward to working with Amb. Friedman and the entire Trump team to advance our shared goal of strengthening the US-Israel relationship,” said CUFI founder and Chairman Pastor John Hagee.

“Christians United for Israel has worked hard to ensure that David Friedman would be confirmed, from taking out full page ads in Washington newspapers to having our membership visit with, call and e-mail every senator.  We were determined to ensure that this good and qualified man was not derailed by opponents raising an unprecedented “but we don’t agree with him on policy” standard.  We are pleased that the Senate has done the right thing,” said CUFI founding executive director and current Board member David Brog.

“We are very grateful the Senate has done its job by examining and now confirming the President’s pick to serve as US Ambassador to Israel. This experience shows that despite the challenging Washington atmosphere, when ordinary voters decide to speak up about issues important to them, their elected officials take note,” said the CUFI Action Fund’s Washington Director Gary Bauer.