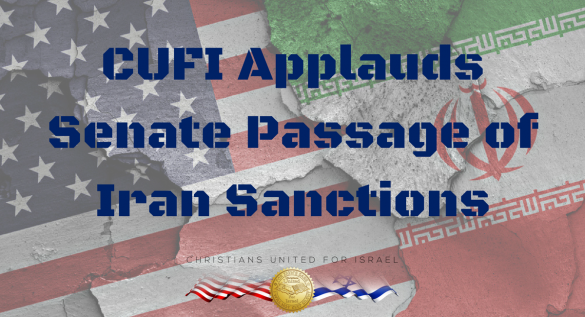 From email action alerts and phone calls to in-person lobbying efforts, CUFI’s 3.5 million members have long supported efforts to curb Iran’s imperial ambitions. While the Iran nuclear agreement was sold to the American people with the promise that Tehran would moderate its behavior, the Islamic Republic continues to work to consolidate power and export bloodshed. Iran’s support for terror, ballistic missile program and human rights record demand US action. S. 722 is a good first step. We look forward to the House of Representatives taking up the issue without delay.

With more than 3.5 million members, Christians United for Israel is the largest pro-Israel organization in the United States and one of the leading Christian grassroots movements in the world. CUFI spans all fifty states and reaches millions with its message. Each year, CUFI holds hundreds of pro-Israel events in cities around the country. And each July, thousands of pro-Israel Christians gather in Washington, D.C. to participate in the CUFI Washington Summit and make their voices heard in support of Israel and the Jewish people.