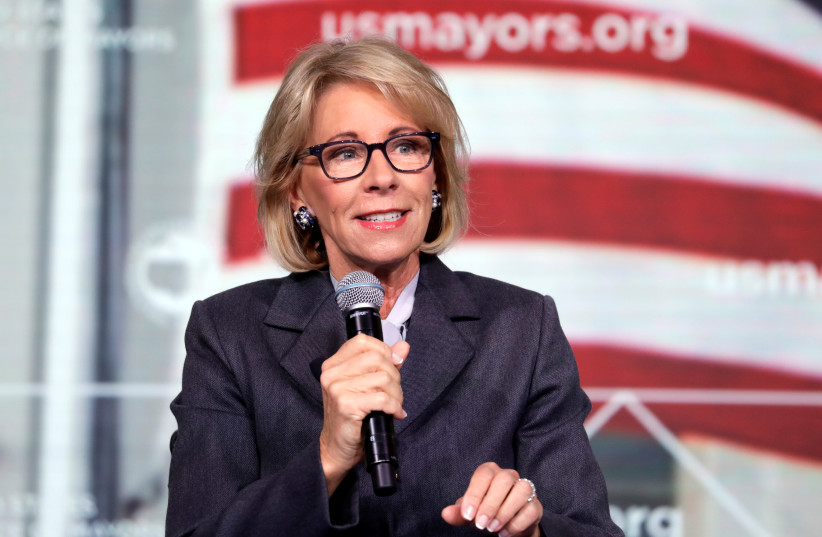 Eight members of Congress called for the US Department of Education to prevent federally-funded Middle East Studies Centers from implementing academic boycotts of Israel.

In a letter sent to Education Secretary Betsy DeVos, the Congress members expressed “concerns that federally-funded Middle East Studies National Resource Centers (NRCs) are misusing their Title VI grant funds,” and that “it is important that the department maintain oversight of grantees to ensure that Title VI-funded NRCs are utilizing taxpayer dollars in accordance with the law, as written by Congress.”

The Congress members made it clear that “numerous directors and faculty of Title VI-funded Middle East Studies NRCs have endorsed an academic boycott of Israel… In a coalition letter sent to you last year, concerned organizations highlighted that two current directors of Title VI-funded Middle East Studies NRCs called for an end to their schools’ study abroad program in Israel.” The letter continued: “Were these directors and faculty members to succeed in implementing an academic boycott under a Title VI-funded program, it would be in clear violation of the statutory purposes of Title VI.” Members implored the Education Department to make sure that taxpayer-funded NRCs are implementing programs “in good faith with the statutory purposes and requirements of Title VI.”
The letter continued, “We strongly urge the Department to take proactive actions to ensure that future NRC grantees make verifiable assurances that their programs or centers, along with their directors, faculty and staff comply with the statutory purposes and requirements of Title VI.” They stressed that DeVos’s department should use its authority under Title VI to enhance grant application requirements “for these programs and centers… [and] provide assurances that they will not implement an academic boycott of a country within their program or center’s purview.”

The Title VI Higher Education Opportunity Act, enacted by Congress as part of the 1965 Higher Education Act, provides millions of federal dollars to more than 100 international studies and foreign-language centers at universities nationwide. It also has the mandate to strengthen US security by training specialists and educating the public.

The letter to DeVos comes just weeks after 88 groups, led by the AMCHA Initiative, also appealed to the US Department of Education to put an end to federal funding being used for Middle East Studies programs that support academic Boycott, Divestment and Sanctions. AMCHA Initiative director Tammi Rossman-Benjamin told The Jerusalem Post that the Education Department needs to “act immediately to halt reprehensible attempts by faculty to use taxpayer dollars to implement an academic boycott of Israel.” She also noted that “these federal funds are meant to educate, not push the political agenda of individual faculty members… We greatly appreciate Representative Grothman and his colleagues for their leadership and congressional muscle in helping highlight this problem and right this wrong.”