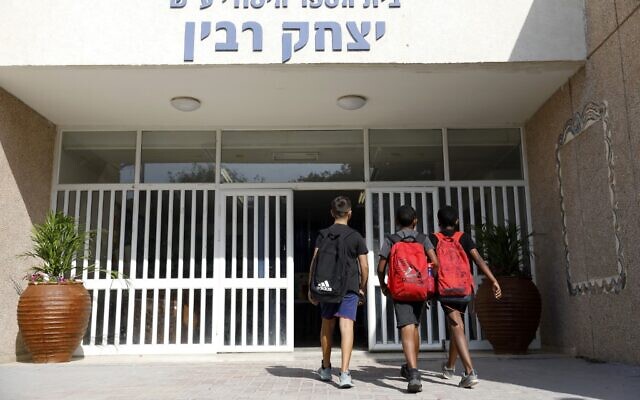 Several rockets were fired at Israel from Gaza Thursday morning and afternoon, puncturing a tense calm and leading to fears of a resumption of violence. Pieces of one projectile landed in the yard of a daycare in Netivot.

“The decision was made out of concerns for the students and teaching staff,” the communities said Thursday in a joint statement.

Earlier, the Israeli military’s Forces Home Front Command announced it was removing all safety restrictions on the area in place since Tuesday, allowing studies to resume and businesses to reopen, despite the sporadic fire.

“We are in touch with the IDF [Israel Defense Forces] and are assessing the developments [of the situation],” the community statement said.

The closings cover the Eshkol, Sdot Negev, Shaar Hanegev and Hof Ashkelon regional councils, as well as the city of Sderot.

The city of Netivot announced the closure of all its schools in the predawn hours of Friday morning after facing some criticism for not having done so sooner.

Despite an Egyptian-brokered ceasefire announced by Islamic Jihad taking effect at 5:30 a.m., rockets were twice fired from Gaza during the day, violating the agreement.

After the latest rocket launch early Thursday evening, Israeli military and political officials held emergency meetings to determine how to proceed with the shaky ceasefire agreement.

Israeli leaders have warned they would not hesitate to return to battle footing.

Islamic Jihad’s military wing as well threatened Israel that it was ready to continue fighting.

“Our fighters in all of our military units still have their fingers on the trigger and they work in accordance with a fully integrated military system that depends on the command of the movement’s leadership,” the Al Quds Brigade said in a statement, unveiling what it said was a new rocket used in the fighting– the Buraq 120.

Earlier, the IDF said schools and businesses were allowed to reopen and limits on the sizes of gatherings were removed in the Gaza periphery and nearby Lachish region. The restrictions had been removed from the rest of southern and central Israel earlier in the day but briefly remained in place in the most hard-hit areas.

In addition, Israel reopened all land crossings for the Gaza Strip and resumed allowing Palestinian fisherman to work up to 15 nautical miles from the shore, following a security assessment, an Israeli official said Thursday.

Touring an Iron Dome command center Thursday, Prime Minister Benjamin Netanyahu said the fighting had ended and Israel had sent a deterrent message to “our enemies” before the ceasefire was reached.

Over the course of some 48 hours, from predawn Tuesday to Thursday morning, over 450 rockets and mortar shells were fired at southern Israel from the Gaza Strip in response to the assassination of Abu al-Ata, who Israel said was the “prime instigator” of terrorism from Gaza over the past year.

Most of the rockets either landed in open fields or were intercepted by Israeli air defenses. Some struck homes, businesses and streets, causing a handful of light to moderate injuries and significant property damage. Dozens of people were also wounded as they fell running to bomb shelters.

In response to the attacks, the Israeli military conducted dozens of strikes on Islamic Jihad bases and weapons facilities, as well as rocket-launching teams throughout the Strip, killing 25 terrorists, according to the IDF.

Aside from the sporadic rocket fire, the fragile truce appeared to hold, with no further violations of the armistice recorded.