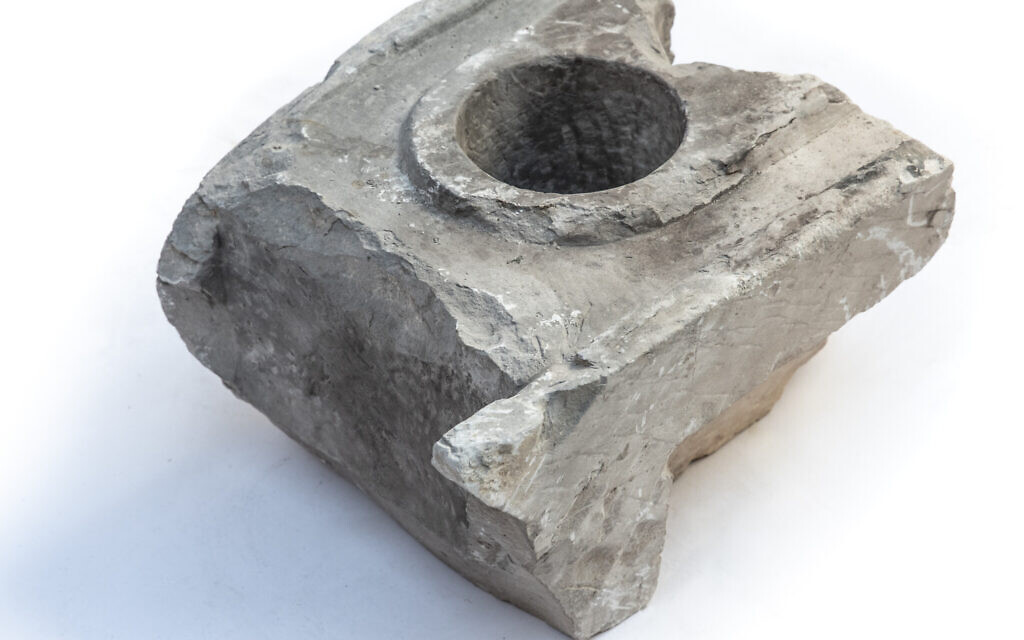 A rare Second Temple measuring table was recently discovered in the City of David, and it is causing archaeologists to identify an ancient Jerusalem square as the city’s 2,000-year-old central market, according to Israel Antiquities Authority archaeologist Ari Levy.

In conversation with The Times of Israel on Monday, Levy said the stone table would have belonged to the market’s manager, or agoranomos, who was in charge of the weights and measures of commodities traded in the shuk.

The measuring table was found in a broad paved central square still undergoing excavation, alongside dozens of stone measurement weights. The sum of the parts has led the IAA archaeologists to conclude that this area of the Stepped Street, a paved 2,000-year-old pilgrims’ path that connects the Siloam Pool with the Temple Mount, would have served as ancient Jerusalem’s main market.

“The volume standard table we’ve found, as well as the stone weights discovered nearby, support the theory that this was the site of vast trade activity, and perhaps this may indicate the existence of a market,” said Levy in a press release.

Today, the path is five meters (16 feet) under ground. Archaeologists and historians call the road that is being excavated under an East Jerusalem Arab neighborhood the “Stepped Street.” In more popular parlance it is called the “Pilgrims’ Path” or the “Pilgrimage Road.” In total, the path stretches some 600 meters long and is eight meters wide. Both sides of the street were lined with shops that were likely two stories high, said Levy during a recent visit there.

It was built starting in 20 CE by the Romans and completed under the governance of Pontius Pilate in about 30 CE. A recent study of 100 coins collected under pavement at the site appears to confirm this dating.

But the Romans, in destroying Jerusalem in 70 CE, covered up all their hard work just 40 years later. For the past decade, Jerusalem archaeologists have been excavating the dirt and debris that cover the near-mint condition Roman paving stones. Along the way, they’ve uncovered untold artifacts, such as this measuring table.

Only two other such measuring tables have been discovered in Israel: One in the 1970s in the Old City of Jerusalem’s Jewish Quarter by Dr. Nahman Avigad, and the second during excavations in Shuafat in northern Jerusalem in 2007 under Dr. Rahel Bar-Natan. However, contemporary measuring tables are found in city centers throughout the Roman Empire that used the same system of measures for the volume of the liquids — likely olive oil or wine — as the one found in the City of David find, said Levy.

The fact that the measuring table is made of stone has nothing to do with Temple purity, said archaeologist Levy. Asked who this market manager would have been — Roman or Jewish — Levy laughed and said, “Until we find his identification card, we can’t know.”

The role of the market manager or agoranomos (the Greek agora connotes a central public space), well documented in antiquity, arrived in the Land of Israel during the Hellenistic period. It is mentioned in the Book of Maccabees, according to an Encyclopedia.com entry: “In Jerusalem, the controversy between Onias, the high priest, and Simeon in regard to the office of the agoranomia was one of the causes of the civil war in the early 70s of the second century b.c.e.” Roman Jewish historian Josephus also makes reference to the office — and the Jerusalem square where he would have sat.

In the Talmud it is described that whereas in Jerusalem prior to the fall of the Second Temple in 70 CE, the market manager would have only been in charge of weights and measures, the office in Babylon expanded to assigning the value of the foodstuffs.

The location of the measuring table and the additional finds of weights in the still partially covered square suggest to the archaeologists that the large paved open area, found in the middle of the path leading to the Temple Mount, served as “the focal point of trade and commerce,” according to an IAA press release announcing the find.

Preliminary research into the table is being conducted by archaeologist Prof. Ronny Reich, an expert in ancient Jerusalem who was among the first to find portions of the sewer system which led to the discovery of the Pilgrims’ Path.

Describing the piece of the stone table top, Reich said in the press release, “We see two of the deep cavities remain, each with a drain at its bottom. The drain at the bottom could be plugged with a finger, filled with a liquid of some type, and once the finger was removed, the liquid could be drained into a container, therefore determining the volume of the container, using the measurement table as a uniform guideline. This way, traders could calibrate their measuring instruments using a uniform standard.”

The dozens of weights discovered in the town square and the surrounding area were made from flat stones of different weights and sizes. Reich said some 90 percent of weights of this type come from excavations of Second Temple period sites in Jerusalem and are a uniquely Jerusalem weight class.

According to Levy, the accompanying stone measure weights are typical to the period in Jerusalem. “The fact that there were city-specific weights at the site indicates the unique features of the economy and trade in Jerusalem during the Second Temple period, possibly due to the influence of the Temple itself,” he said in the press release.

The City of David’s underground Stepped Street is still being excavated, in two shifts a day, from 7 a.m. to 10 p.m., and will not be fully open to the public for several years, said Levy.