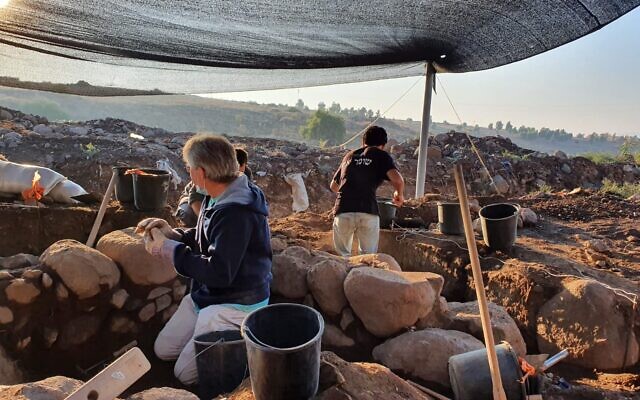 With the words, “Christ born of Mary,” archaeologists have discovered the first evidence of an early Christian settlement from 1,500 years ago in what is today the location of a small Arab village near Nazareth.

According to Israel Antiquities Authority researchers, a recently discovered Greek inscription dedicated to the Christian Messiah had originally been laid at the entry way of a previously unknown 5th century church. The inscribed stone was recently discovered in secondary use in a wall of the late-Byzantine era structure during excavations in Taibe, located in the Jezreel Valley in northern Israel.

According to the text, the church was founded under the auspices of the well-known late 5th century Beit She’an regional archbishop Theodosius, whose name in the partially destroyed text provided the archaeologists with a secure dating.

“The importance of the inscription is that until now we didn’t know for certain that there were churches from this period in this area,” Israel Antiquities Authority archaeologist Walid Atrash told The Times of Israel. Other remains from this period have been uncovered in nearby Tamra and a monastery was recently discovered by the IAA’s Nurit Feig and Moti Aviam of Kinneret College in neighboring Kfar Kama.

Ruins of a Crusader-period church were previously discovered at Taibe, said Atrash, but until now there has been no evidence of a Christian presence from the earlier Byzantine era. Although the location is not mentioned in the New Testament, the discovery that there was a Byzantine-era church built here is “unsurprising,” said Atrash.