Chanting ‘death to Israel,’ Iranians rally against US blacklisting of Guard 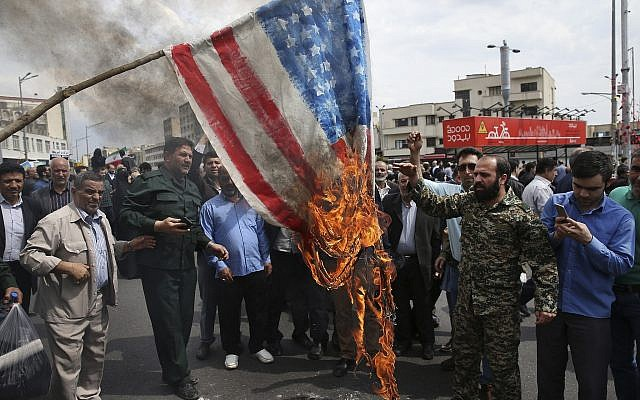 TEHRAN — Iranians rallied on Friday against the US’s decision to designate the country’s powerful Revolutionary Guards as a foreign terrorist organization.

Thousands of worshippers came out of mosques after prayers and burned flags of both the US and Israel while also chanting traditional anti-US and anti-Israel slogans at such rallies of “Death to America” and “Death to Israel.”

The US government this week designated the Revolutionary Guard as a terrorist group to increase pressure on Iran, isolate it further and prompt authorities to divert some of the financial resources Tehran uses to fund militant activity in the Middle East and beyond.

Iran responded by designating all US forces as terrorist and labeling the US a “supporter of terrorism.”

Also Friday, Foreign Minister Mohammad Javad Zarif sent a letter to the UN Security Council and Secretary-General Antonio Guterres stressing that Iran would hold the US accountable for any future provocations against the Iranian Revolutionary Guard Corps, or IRGC.

According to the state-run IRNA news agency, Zarif said the US and “several puppet governments will bear responsibility for dangerous consequences of the adventurism.”