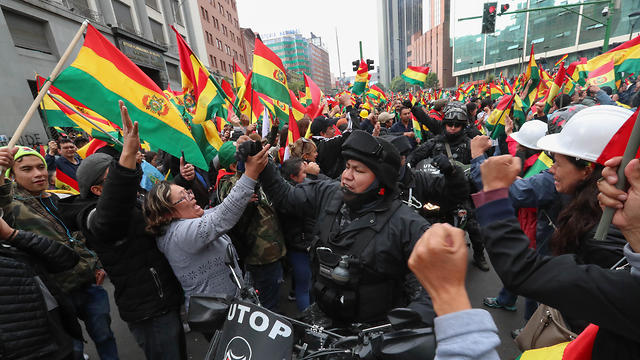 Bolivian Foreign Minister Karen Longaric announced the renewal of diplomatic relations with Israel on Thursday for the first time in a decade.

The Foreign Ministry held intensive talks recently with Bolivia in an effort to re-establish the ties between the two countries, which were officially severed on January 14, 2009, following Operation Cast Lead – Israel’s 2008 military campaign against Palestinian terror factions in the Gaza Strip.

The rekindled relations were made possible after Bolivian President Evo Morales, who was hostile towards Israel, stepped down from office earlier this month and his administration was replaced by a pro-American interim government.
Brazil’s Foreign Minister Ernesto Araújo and Brazilian President Jair Bolsonaro were also reportedly involved in the talks with the new Bolivian administration.

Foreign Minister Israel Katz welcomed the revival of the relations between the Jewish state and the South American country.
“This will strengthen Israel’s foreign relations and it’s position around the world,” said Katz. “The Foreign Ministry has been long working directly with the Bolivian administration to promote the renewal of relations and also with the help of the Brazilian president and Foreign Minister, with whom I have recently spoken on the issue at the United Nations General Assembly in New York.”
The departure of President Morales, who was hostile towards Israel, and his replacement by a government friendly to Israel allowed the process to materialize.”

Morales announced the severing of diplomatic relations with Israel in a speech he gave in 2009 in front of diplomats at the presidential palace in Bolivia’s de facto capital of La Paz.

The Bolivian president claimed that Israel’s Operation Cast Lead in Gaza was “a serious threat to world peace” and said that then-Prime Minister Ehud Olmert should face criminal charges for his part in the deaths of hundreds of Palestinian civilians.
Morales even chided the United Nations Security Council, calling it the “Insecurity Council” for its “lukewarm” response to the crisis in the coastal enclave. He called for the UN to hold an emergency general session to condemn the fighting.
He also said that then-Israeli President Shimon Peres should be stripped of his Nobel Peace Prize for failing to stop the operation.
Despite the lack of diplomatic relations between Israel and Bolivia, thousands of Israeli backpackers continued to visit and travel the Latin American country with the local authorities’ full cooperation.

In the absence of an embassy or a consulate in Bolivia, Israel’s Honorary Consul in La Paz Roberto Nelkenbaum – a Jewish businessman and a former race driver – was in charge of helping Israeli backpackers who got into trouble.

Nelkenbaum would also work in coordination with the local authorities in arranging to fly home the bodies of Israelis who died during their stay in the country.