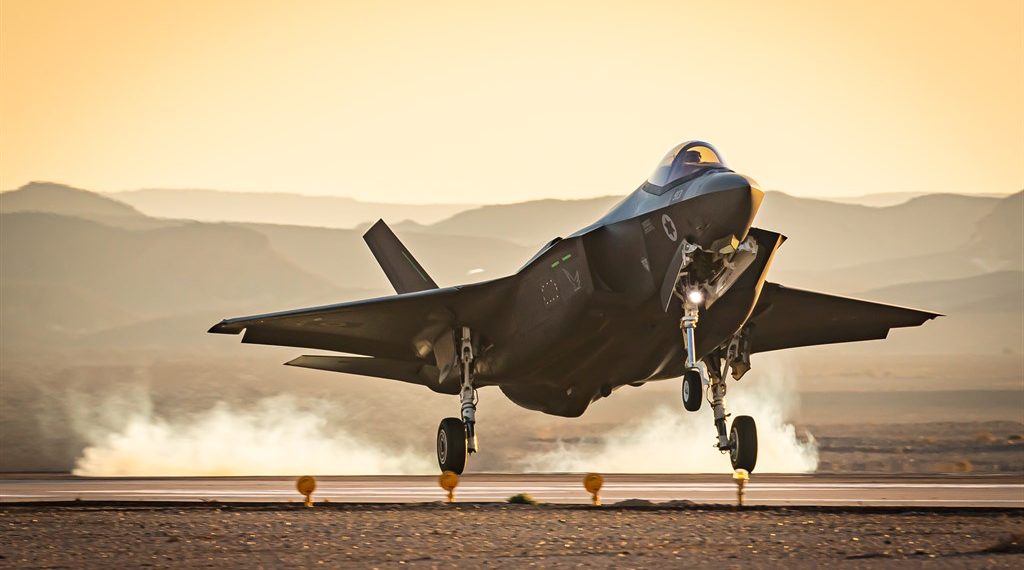 Israel completed its fourth international air exercise in southern Israel, Blue Flag 2019, earlier this month – a drill that planners have described as being the most advanced of its kind to date.

Towards the end of the exercise, held from Nov. 3 to Nov. 14 at Uvda Air Force Base, just north of Eilat, other jets from the Israel Air Force were busy striking Palestinian Islamic Jihad targets in the Gaza Strip as rockets flew in the direction of Israeli cities.

Yet the air forces of the United States, Germany, Italy and Greece joined Israeli flight crews and completed the joint training as planned.

“In 2017, we called Blue Flag our biggest drill. Now, in 2019, we are describing this drill as being the most advanced,” Lt. Col. (res.) Tal Herman, head of the IAF’s Blue Flag management team, told JNS in the midst of the exercise.

“What makes it advanced is that, first of all, this is the first time that fifth-generation aircraft – the Israeli F-35 and the Italian F-35 – are taking part. We focused on integrating these planes and linking them up with fourth-generation planes, like F-15s and F-16s, and the German and Italian Eurofighters,” he explained.

“There are lots of flying computers, and they all have to talk to one another,” he added.

The introduction of the F-35 to the exercise helped make that task easier since the international aircraft all have NATO’s Link 16 communications system installed onboard – a system the IAF has not previously had until the arrival of the Israeli F-35, which comes with the system installed.

This means that for the first time, Israeli jets connected to the NATO Link 16 network.

“It has been very successful so far,” stated Herman. “We made major efforts to enable this connection. It is a breakthrough, and it could have operational dividends –if and when needed,” he said referring to the possibility that in future, Israeli F-35 jets would be able to work smoothly with NATO F-35s on joint missions if necessary.

Meanwhile, the IAF’s Eitam command and control aircraft flew with its Italian counterpart; both of these platforms were produced by Israel Aerospace Industries.

The drill consisted of a Red Team – Israeli jets playing the enemy – challenging the Blue Team in the air, as well as simulated missile batteries on the ground “targeting” the Blue Team.

We wanted this to be advanced in the sense that the Red Team simulates assets that are relevant to the arena today, and not only the established threats from past,” said Herman. The Red Team also had F-35s as a result.

“We want the Red Team to be responsive and not come only with a prior game plan. This team has a controller, and he wants to win, so he challenges the Blue Team. But safety comes first. We didn’t come to defeat the Blue Force; we came to train it.”

Integrating the F-35 into such a drill is no easy task, as it’s an aircraft designed to be invisible to others. That also creates challenges for the after-flight review stage, when aircrews sit down to watch recordings of their maneuvers played back to them showing the location of the various aircraft. To overcome that challenge, planners placed location and time-stamp pods on the F-35s so that they could take part in the post-flight reviews.

Otherwise, Herman said, “the plane won’t tell anyone where it was.”

Learning how to deal with fifth-generation stealth planes was a key aspect of the exercise. “How do I bring it down? We placed certain blocks on the plane for the drill to make it fair,” he said.

Until 2014, Herman was responsible for the IAF’s international cooperation with other air forces before joining civilian life. But he has come out of retirement twice to lead Blue Flag exercise: once in 2017 and again now for Blue Flag 2019.

In a statement, the IAF said that “the goal of the exercise is to simulate extreme war and coalition flight scenarios in the most realistic manner. The exercise is of high strategic importance and has a significant influence on the international strategic plans of the State of Israel.”

Asked to list the advantages of such a drill, Herman said, “The first is that it brings people from different air forces together. On the day that a real order might come, it makes it more comfortable to cooperate. We have been together, sitting in the same briefing rooms. We are not strangers. Diplomatically, every picture of a foreign air force flying with the IAF is good for Israel.”

On the professional-technical level, the drill challenges the foreign aircrews by removing them from their comfort zone and getting them to fly in unfamiliar spaces. “They have to fly together with platforms they do not know, against tactics that are not their home court tactics. Some of us have to fly in a different language. Flying in English is a different difficulty level,” said Herman.

Pilots on their home turf know where to land if they run into technical problems. Not so when training abroad.

“The professional tension is high. This is similar to what could happen in a real emergency,” explained Herman. “They could get taken out of their comfort zone, and they don’t wake up in a familiar bed. Everyone wants good results; everyone wants to perform. These aspects mean there is a big added value for training the individual.”

In 2019, the IAF took a part in a number of training exercises in Israel and abroad, including joint drills in Greece, Cyprus, and Britain.