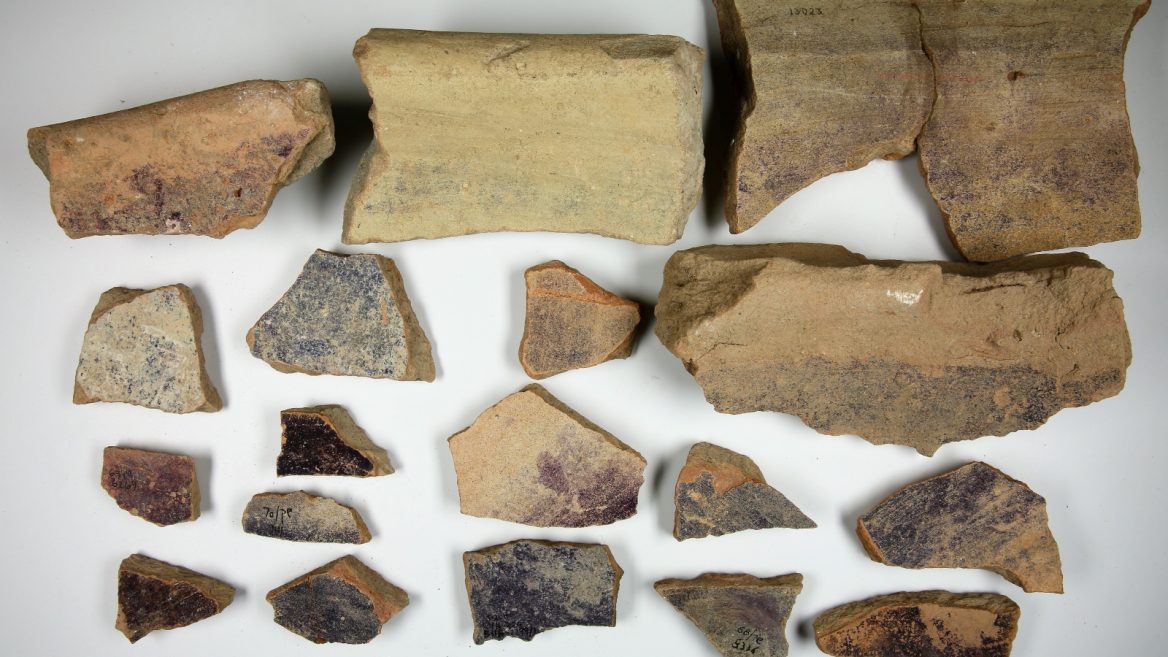 The first biblical-era facility for producing prestigious purple-dyed textiles has been uncovered at Tel Shikmona, south of Haifa.

“Until now, there has not been any meaningful direct archeological evidence of workshops for the production of purple-colored textiles from the Iron Age – the biblical period – not even in Tyre and Sidon, which were the main Phoenician centers for the manufacture of purple dye,” said Prof. Ayelet Gilboa and PhD candidate Golan Shalvi from the University of Haifa.

They are studying the finds, which were uncovered between 1963 and 1977 by Dr. Yosef Elgavis on behalf of the Haifa Museum and were guarded in storerooms for the last half century.

“If we have identified our findings correctly, Tel Shikmona on the Carmel coast has just become one of the most unique archeological sites in the region.”

Tel Shikmona is situated on a small coastal promontory on the southern outskirts of Haifa. It’s part of a larger site that dates to the Iron Age biblical period of the judges, the United Monarchy (Saul, David and Solomon), and the kingdoms of Israel and Judea.

Archeologists could not understand why a settlement was established on a rocky coastline unsuitable for landing boats or establishing agriculture.

Now that Gilboa and Shalvi have been granted access to Elgavish’s finds, it all begins to make sense: Shikmona was a fortified factory located near the habitat of Murex snails, from which purple dye (in Hebrew, argaman and techelet) was extracted. The employees had a connection to the Phoenicians, who held the secrets of the manufacture of purple dye; and used Phoenician pottery for trading purple-dyed cloth.

Indeed, the archives held a wealth of findings associated with Phoenician culture, including the largest number of Cypriot “Black-on-Red ware” ever found outside the island. Shikmona also held the largest collection of ceramic vats found anywhere in the world from the first millennium BCE that still preserve purple coloring of various shades.

Nira Karmon and Prof. Ehud Spanier from the University of Haifa previously determined that the pigments they examined in some of the vats were from marine snails.

A new chemical analysis of dozens of the Shikmona ceramic vats by Naama Sukenik, curator of organic materials in the Israel Antiquities Authority, with Bar-Ilan University researchers David Ilouz, Alexander Vervack and Prof. Zohar Amar, has proven that on all the items the stains are indeed extracted from snails.

“It is very rare to find shards from this period featuring purple color. Such items have been found in other sites along Israel’s northern coast, such as Dor and Akko, but in small numbers. Yet at Shikmona there are almost 30 vessels of this type. This is very unusual,” the researchers emphasized.

Dozens of spindle whorls and loom weights were also found on site.

Since thousands of snails were needed in order to produce a single kilogram of dye, wearing purple clothes became the privilege of nobility and royalty. The secret process for the manufacture and dyeing of purple was guarded jealously.

The Shikmona project is being undertaken under the auspices of the Zinman Institute of Archeology at the University of Haifa, with the support of the Israel Antiquities Authority and the National Maritime Museum in Haifa, where some of the findings are permanently displayed.