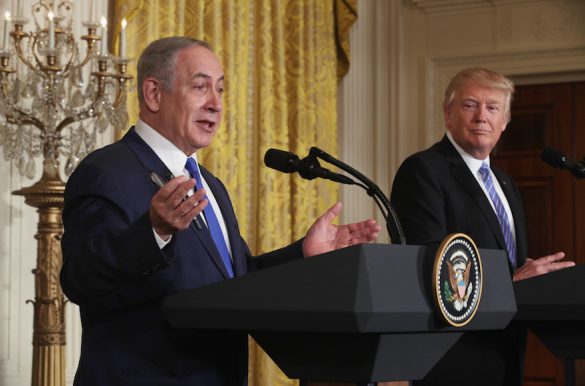 Prime Minister Benjamin Netanyahu on Thursday said he looked forward to talking with US President Donald Trump about the best way to advance peace between Israel and the Palestinians.

He spoke just one day after Trump announced the start of a new peace processduring a joint press conference with Palestinian Authority President Mahmoud Abbas in Washington. The US president is due to visit Israel later this month.

A desire for peace is something Israel “fervently shares with the President.”

But Netanyahu objected to the comments Abbas made the day before.

“I heard President Abbas yesterday say that Palestinians teach their children peace. That’s unfortunately not true. They name their schools after mass murders of Israelis and they pay terrorists,” he said.

The premier made the remarks during a meeting with Romanian Prime Minister Sorin Grindeanu in Jerusalem. He also stated that discussing an approach to advancing peace talks was a priority that both the government in Jerusalem and Trump seek. “This is something we fervently share with the President.”Meanwhile in Brussels, Regional Cooperation Minister Tzachi Hanegbi (Likud) was expected on Thursday afternoon to attend a high-level meeting — the Ad Hoc Liaison Committee — with representatives from the PA, the European Union, the United States and the United Nations.

The annual spring meeting, which coordinates donor funding to the PA, will be hosted by High Representative of the European Union for Foreign Affairs Federica Mogherini and chaired by Norwegian Foreign Minister Borge Brende.

On the sidelines of that meeting, US special envoy Jason Greenblatt is expected to update Hanegbi on Trump’s talk with Abbas in Washington.