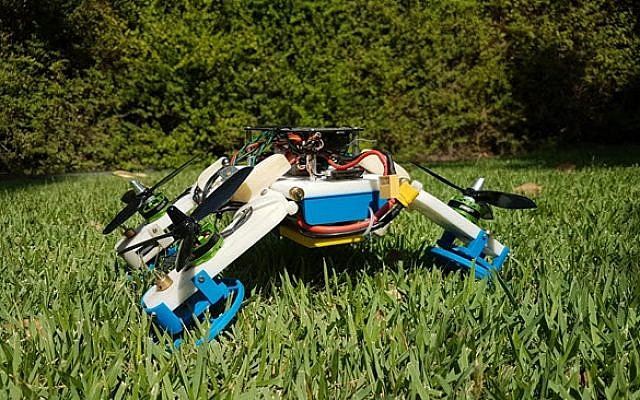 Researchers at Ben-Gurion University of the Negev said they have developed a “groundbreaking” hybrid robot that can both fly and drive, as well as squeeze into tight spaces, all while using the same motor.

The square four-wheeled, winged machine can fly up stairs, roll over rough terrain, flatten itself or raise its body, and quickly move from driving mode into flying mode. It can adjust its width to crawl or run on flat surfaces, climb over large obstacles and up walls, or squeeze through a tunnel, pipe or narrow gap. The robot can move on the ground at a speed of up to eight feet per second (2.6 m/s) and uses low energy to operate.

The FSTAR (flying sprawl-tuned autonomous robot) could be used for a variety of commercial purposes, the university said in a statement, including package deliveries, since it can fly to a target zone and then drive to the recipient’s doorstep.

FSTAR can also be used for search and rescue applications because it can reach places where a regular drone cannot fly. Other areas of use include agriculture, maintenance, cleaning, filming, and entertainment, as well as law enforcement and anti-terrorist applications, the statement said.