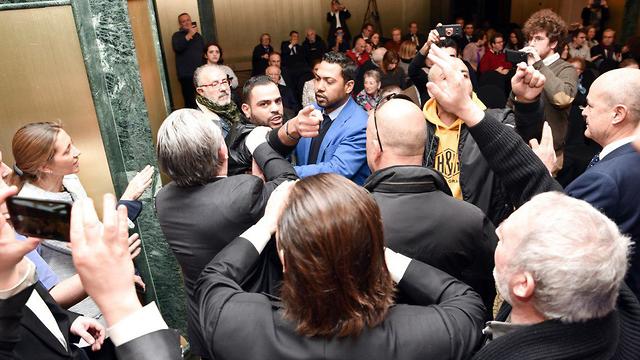 A joint delegation comprised of Arab and Jewish residents of the West Bank, including the head of the Samaria Regional Council, Yossi Dagan, was attacked by members of the anti-Israel Boycott, Sanctions and Divestment Movement in Madrid on Tuesday.

The delegation arrived in Madrid to meet with members of the Spanish parliament and discuss the European Union Court of Justice decision to label products from the settlements in the West Bank.

After meeting with Spanish lawmakers, delegation members participated in a panel discussion at Madrid’s Intercontinental hotel, where they explained why marking settlement products hurts both Arabs and Jews.

A short while after the panel began, BDS members started waving PLO flags, hurling insults, rioting, and trying to physically attack both Arab and Jewish members of the delegation.

“We are not afraid of you,” yelled Dagan as the panel’s security tackled the rioters.
“You don’t love Arabs, you just hate Jews. This is your true face, you should all be ashamed.”

After removing the rioters from the hotel, Dagan thanked the security staff and said the protesters were motivated by hatred of Israel and not a desire to help Palestinians.

“None of the BDS has ever spoken to any resident of the West Bank,” he said.

“They don’t care what’s going on out there, all they have is ignorance, hate, and a desire to destroy Israel.”

Due to the concern for the delegation member’s lives, Madrid’s special forces were called to the scene in order to remove them safely out of the hotel.

Dagan then refused a request to leave the hotel via the back door.

The delegation was part of a project by Samaria Regional Council’s foreign relations department aimed at reversing the EU decision on labeling West Bank settlement products.