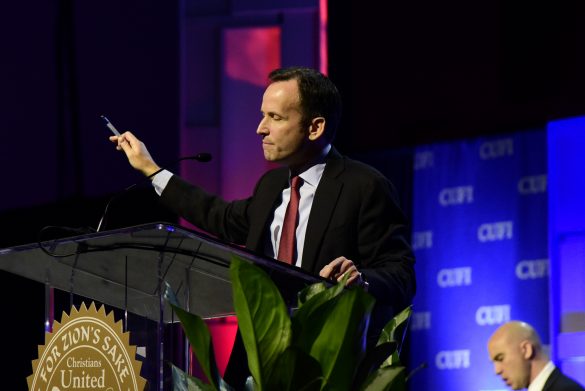 David Brog — the founding director of Christians United for Israel (CUFI) and executive director of the Maccabee Task Force — was recently interviewed by The Algemeiner about his latest book, Reclaiming Israel’s History: Roots, Rights, and the Struggle for Peace.

A transcript of the conversation — in which Brog discusses the current state of pro-Israel advocacy and calls for a fresh approach based on highlighting the Jewish state’s morality — follows.

What prompted you to write this book?

“I wanted to counter a trend. The rising generation of Americans — including so many who consider themselves pro-Israel — are increasingly buying into the fantasy that Israel is the main obstacle to peace in the Middle East. I say ‘fantasy’ because this view is contrary to the facts. And I say ‘fantasy’ because it’s an alluring belief. After all, if Israel is the obstacle to peace, then pressure on Israel can actually bring peace. There can be peace in our time!”

“When our young people buy into this myth, they grow embarrassed and equivocal in their pro-Israel activism. They try to change the topic. They’ll talk about Tel Aviv’s gay pride parades, Israel’s food scene and, of course, high tech. But they’ll never address the underlying moral claims that are doing so much damage to Israel’s reputation because they believe (or fear) that Israel is guilty as charged.”

“Here’s the good news. Most students who accept the prevailing myths about Israel do so simply because they don’t know better — no one’s ever told them otherwise. My experience over years of working with students is that when they learn the facts about Israel they’re both relieved and energized to go out and share these truths. My book is an effort to compile in one accessible, chronological narrative all of the facts and history that my students have found most important over the years.”

There are quite a few “case for Israel” books that have been written. Why is yours different?

“Most of the ‘case for Israel’ books are too difficult for people who’ve never studied this conflict in depth. These books tend to jump from topic to topic and era to era. 1948, 1967, 1973, Camp David with Begin and Sadat, Camp David with Barak and Arafat — it becomes a confused jumble. My book is a fast-paced, chronological and easy-to-read history of Israel that focuses on those aspects of Israel’s history that are most effective in demolishing the new anti-Israel narrative.”

“Even more importantly, my book expands our narrow, pro-Israel canon. Over the years we’ve all been reduced to repeating the same limited set of pro-Israel talking points. But our standard repertoire leaves out so many of the facts and stories that are most effective when making the case for Israel. My book reclaims this forgotten history and, I hope, will reintroduce it to all of us who wish to believe in and defend the State of Israel.”