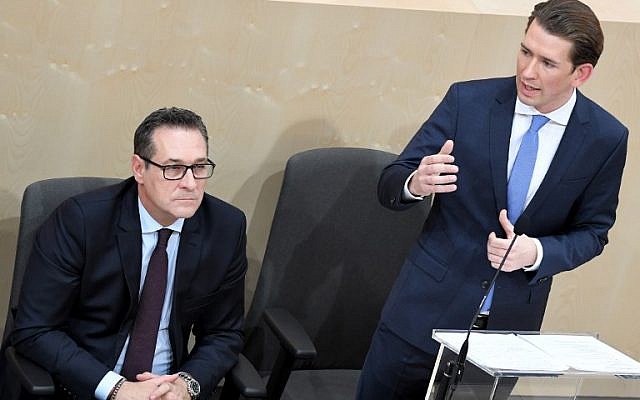 The Austrian parliament is expected to unanimously pass a resolution against “Israel-related anti-Semitism” that calls on the government to condemn the Boycott, Divestment and Sanctions (BDS) movement.

On Wednesday, all five parties represented in Austria’s National Council — including the Greens and the far-right Freedom Party — agreed to support the text of the resolution and to hold a vote on it next month.

The initiative was spearheaded by the center-right People’s Party, headed by former and likely future chancellor Sebastian Kurz, but legislators from all five major parties are formally co-sponsoring the resolution. Austrian lawmakers rarely vote against their own factions, which means that the resolution is likely to be accepted unanimously.

“The National Council emphatically condemns all kinds of anti-Semitism, including Israel-related anti-Semitism, and calls on the federal government to confront these tendencies resolutely and consequently,” the resolution states.

The text further urges the government to “strongly condemn the BDS movement and its goals, especially the call for a boycott of Israeli products, businesses, artists, scientists or athletes.”

Vienna should not provide any infrastructure to organizations that make anti-Semitic statements or question Israel’s right to exist, according to the resolution. Furthermore, the government is called upon “not to support financially or in any other way” events organized by the BDS movement or groups that further it goals.

In its lengthy preamble, the resolution says that BDS has gained strength in Austria in recent years, and that the movement “employs anti-Semitic patterns.” It demonizes Israel, applies a “double standard” to the country and blames Austrian Jews for its policies.

Furthermore, it accuses BDS of questioning Israel’s right to exist by demanding a right of return for Palestinian refugees and all their descendants, according to the document.

Austria views any form of anti-Semitism as unacceptable, “and that of course includes Israel-related anti-Semitism,” the resolution’s preamble underlines, adding: “Factual criticism of individual measures by the Israel government must of course be admissible.”

Oskar Deutsch, the head of Austria’s Jewish community, welcomed the plan to unanimously pass a resolution that would prevent BDS from receiving federal funding. “With this the federal government joins [the municipalities of] Vienna and Graz in forcefully confronting anti-Semitism hiding behind the ‘criticism of Israel,’” he said.

In May, Germany’s Bundestag passed a similar resolution, denouncing the BDS movement’s methods as anti-Semitic and reminiscent of Nazi-era calls to boycott Jews.