At UN, Trump calls on Mideast nations to fully normalize ties with Israel 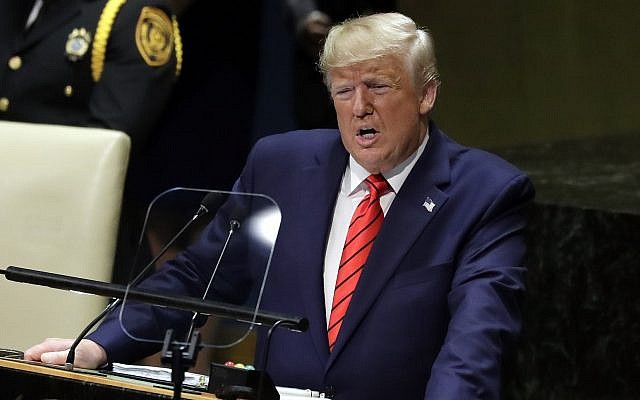 NEW YORK — US President Donald Trump on Tuesday urged Middle Eastern nations to fully normalize diplomatic relations with Israel, while maintaining that crippling US sanctions imposed on Iran would continue until the Islamic Republic changed its behavior.

Speaking before the United Nations General Assembly, the US president accused Tehran of trafficking in “monstrous anti-Semitism” and engaging in a “fanatical quest” to obtain nuclear weapons. Trump said the rogue regime’s aggression had created newfound regional alliances to counter the Iranian threat.

“Thankfully, there is a growing recognition in the wider Middle East that the countries of the region share common interest in battling extremism and unleashing economic opportunity,” Trump said. “That is why it’s so important to have full normalized relations between Israel and its neighbors.”

He continued, “Only a relationship built on common interest, mutual respect, and religious tolerance can forge a better future.”

In a highly anticipated address before the international community — as tensions with Iran intensified after it allegedly attacked two Saudi oil facilities — Trump insisted that he would maintain his “maximum pressure campaign” against Tehran.

Iran, he said, was on a “fanatical quest for nuclear weapons and the means to deliver them.” The world, Trump continued, “must never allow this to happen.”

After the US withdrew from the Iran nuclear deal last year and reimposed harsh sanctions on the Islamic Republic, Trump said, the regime has “escalated its violent and unprovoked aggression.”

“All nations have a duty to act,” Trump said. “No responsible government should subsidize Iran’s bloodlust. As long as Iran’s illicit behavior continues, sanctions will not be lifted. They will be tightened.”

Last week, the US sanctioned Iran’s central bank and two other major state financial institutions as punishment for its alleged attacks on crucial oil supplies in Saudi Arabia. It also said it would send military forces and hardware to Gulf allies and moved to sever some of Iran’s last ties to world markets.

Analysts have feared the moves could leave Trump with little else to sanction for, possibly paving the way for a military confrontation if they do not yield their intended results of altering Iranian behavior and bringing its leaders to the negotiating table to hammer out a revised nuclear accord.

After Trump withdrew the United States from the Obama-brokered Joint Comprehensive Plan of Action (JCPOA) in May 2018, he stated his intention to forge another deal with stronger terms.

The US president said he wanted the pact to include a ban on ballistic missile testing, allow international inspectors access to Iran’s military sites and contain no sunset provisions that allow certain restrictions on its nuclear program to expire.

Trump also used the forum of world leaders to argue that Iran’s hatred of Israel was rooted in its leaders’ dysfunction.

“For 40 years, the world has listened to Iran’s rulers as they lash out on everyone else for the problems they alone have created,” he said. “Last year, the country’s supreme leader stated that Israel is ‘a malignant cancerous tumor that has to be removed and eradicated. It is possible, and it will happen.’”

After a pause for effect, Trump continued, “America will never tolerate such anti-Semitic hate. Fanatics have long used hatred of Israel to distract from their own failures.”

Trump did leave the door open to a very different potential relationship with Iran, however. “America is ready to embrace friendship with all who genuinely seek peace and respect,” he said. “Many of America’s closest friends today were once our greatest foes. The United States has never believed in permanent enemies. We want partners, not adversaries. America knows that while anyone can make war only the most courageous can choose peace.”

The US president did not mention Tuesday his administration’s efforts to clinch an Israeli-Palestinian peace plan. The White House has said it would unveil its proposal after Israel’s September election, once a coalition is formed.

With Israel currently deadlocked after both Blue and White and Likud have failed to garner a bloc of more than 61 members, it’s possible the extended period of coalition negotiations will delay once again the release of the Trump peace plan.