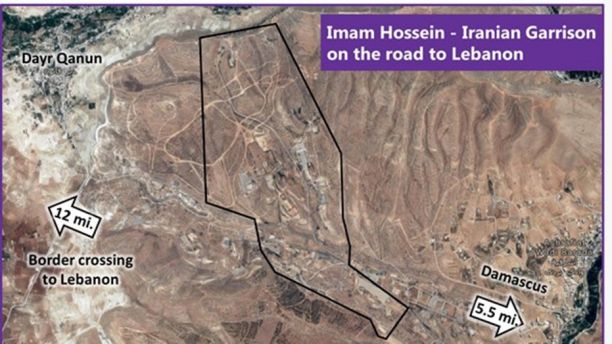 As decision time comes closer for President Donald Trump to stay in or withdraw from the Iran nuclear deal, more evidence of Iranian intransigence in the region was given to members of the U.N. Security Council by Israel earlier today.

At a debate on the situation in the Middle East, including the Palestine Question, Israeli Ambassador Danny Danon released a previously classified Israeli intelligence document showing a satellite photograph of what he said was an Iranian-run induction and recruitment center close to Syria’s capital Damascus, and only 12 miles from the border with Lebanon.

Danon claimed that more than 80,000 Shi’ite militants are operating in Syria under Iranian control. He said, “We are presenting this image to the world so you can understand the depth of Iran’s involvement in Syria. What you see here is Iran’s central induction and recruitment center in Syria. … It is at this base, just over five miles from Damascus, where they are trained to commit acts of terror in Syria and across the region.”

Without mentioning Iran by name, Danon warned: “Israel has a very clear policy that we have held since the administration of Prime Minister Menachem Begin. We will not allow regimes that seek our destruction to acquire nuclear weapons. Period.”

In her speech she condemned the growing use of using children, women and men as human shields. Haley said the use of human shields had reached “epic proportions.” She gave examples of how Hezbollah, Hamas, ISIS and the Houthis in Yemen have used them.

Haley took aim at Tehran for its support of terrorist groups and destabilization of the region.

She said, “As usual, Iran is the patron and protector of many of these groups that fight from behind the bodies of innocent civilians. Groups that Iran has sponsored or supported have perfected the tactic of using human shields, and inspired others to do the same.”

Haley continued, “Of course, this is part of Iran’s overarching efforts to destabilize the region — efforts that include illegal weapons shipments to Yemen, and invading Israeli air space with armed drones from Syrian territory.”

While Saudi Arabia’s Ambassador to the United Nations Abdallah Al-Mouallimi harshly condemned Israel over the situation in Gaza and the occupied territories, he also joined in the criticism of regional foe Iran for its interference in the region and called for action.