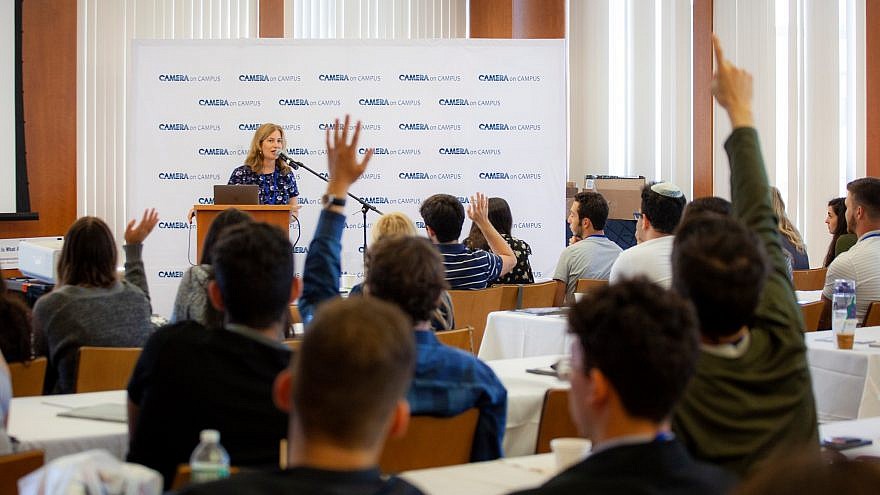 Universities have long been one of the toughest environments for pro-Israel students. They have battled stilted curriculums when it comes to the Israeli-Palestinian conflict, and more recently, grappled with on-campus pressure in the face of growing BDS activity. Combined with a general uptick in anti-Semitism, including the deadly shootings in Pittsburgh and Poway, many Jewish and pro-Israel students have increasingly felt under siege.

To that end, students from more than 80 campuses gathered in Boston in mid-August for a high-level training conference to gain support and learn the tools necessary to respond to the upsurge in campus anti-Semitism and anti-Israel activism.

Hosted by the campus department of the Committee for Accuracy in Middle East Reporting and Analysis (CAMERA), a media watchdog organization, students from the United States, Canada, the United Kingdom and Israel took part in a four-day conference at Boston University’s Hillel to learn more about Israel and how to stand up to anti-Israel campus groups—and also to know they are not alone.

“When people get involved in Israel advocacy, they don’t know much and don’t know where to start,” McKenna Bates, a rising senior at George Mason University in Fairfax, Va., told JNS. “The first couple of days of the conference were very intensive and information-based. There was a lot of focus on helping us know what we are talking about—facts about the conflict and Israel, as well as organizations and tools for research and writing.”

Bates, who characterized her university as “very anti-Israel,” noting that she has been verbally attacked, threatened and even sent online death threats by anti-Israel figures, said CAMERA has proven to be a strong resource for her.

“CAMERA has been trying to show us that they are the support system. They have the resources to prove or disprove things. They know how to connect you and defend you,” she said.

Similarly, Josh Eibelman, a rising senior at Cornell University in Ithaca, N.Y., who is studying psychology and biology, told JNS that developing a pro-Israel network was important to him.

“The biggest takeaway for me is I get to connect to pro-Israel students across the country. Keep in touch, collaborate and share ideas,” he said.

Indeed, a number of sessions at the conference were led by CAMERA campus staff to develop solidarity and bonding among the students.

“Students are dealing with a lot of difficulties on campus,” said Hali Haber, director of campus programming and strategic relationships, told JNS. “This conference enables students to meet other people with a similar experience, and to be able to converse and get advice to help them on their campus.”

Practical programs for students included “how to talk about Israel in social situations”; “recruit, recruit, recruit;” and “Twitter is my only friend: utilizing social media to maximize outreach.” Participants also had some downtime to enjoy Boston’s famous Duck Tour boat rides, a krav maga session and movie nights.

‘They are being manipulated’

But one of the main goals was educating students on the anti-Israel groups that students may encounter on campus, specifically Students for Justice in Palestine (SJP), but also other emerging ones. A new challenge is ties between SJP and other vocal anti-Israel groups, such as Jewish Voice for Peace (JVP) and IfNotNow.

Aviva Rosenschein, international campus director for CAMERA, said “we are giving them very detailed information on the organizations that students may encounter on campus. From JVP to SJP and IfNotNow, what these organizations represent and their supposed missions are, and how they can react, respond or engage with them in general,” she said.

“You have to remember that a lot of students who join these organizations are not inherently anti-Semitic; they are coming from a place sounds like a peaceful organization, but they are being manipulated,” she clarified.
Haber said that these Jewish anti-Israel groups work in tandem with SJP and can elevate not only anti-Israel actions, but also anti-Semitism through the legitimacy provided by Jewish groups providing cover for SJP’s attacks.

“I think we are going to see more issues on campus within our Jewish community. IfNotNow, J Street and JVP are going to be our main issues this year, and this only helps to elevate SJP. But I think our students are better prepared after this conference in learning about these groups and the history and mission.”

At the end of 2018, Inside Higher Ed reported that prior to and after the fatal shooting at the Tree of Life synagogue in Pittsburgh in October of that year, “prejudicial displays have plagued college campuses, following a trend of anti-Semitism on the rise at colleges and universities—and around the country—since 2016.”

Couple with the uptick in anti-Semitism has been a growing awareness of the connection between anti-Zionism and anti-Semitism. Several Trump administration officials, including U.S. Secretary of State Mike Pompeo and anti-Semitism envoy Elan Carr have come out forcefully against both issues.

The connection between the two was also a major theme at the CAMERA conference.

Ben Newhouse, a rising junior at New York University in Manhattan’s Greenwich Village, told JNS that one of the biggest takeaways from the conference was the realization that most of the anti-Israel actions he has seen on campus are actually anti-Semitic as well.

“One takeaway from the conference is that they are very clear in saying anti-Zionism is anti-Semitism. Zionism is the belief that the Jewish people have a right to self-determination, just like any other group of people do,” he said. “If you are saying that Jews don’t have this right and are only pointing your finger at the Jewish community, then you are anti-Semitic.”

Last year, the SJP affiliate at NYU was instrumental in pushing the student government to pass a resolution during the Hanukkah holiday to divest from Israel. In the spring, NYU’s Department of Social and Cultural Analysis further voted to boycott the school’s own satellite campus in Tel Aviv.

Newhouse, who was a student at the NYU Tel Aviv campus in the fall of 2018, said these actions were not only anti-Zionist, but anti-Semitic.

“Reflecting back to NYU, that really stuck with me and changed the way I view a lot of the anti-Israel things from last year. I would see anti-Israel events, but would say maybe these people are just legitimately criticizing Israel,” he said. “But this conference reaffirmed in me that a lot of what is being said on college campuses—and in my case, NYU—is just anti-Semitism, plain and simple.”

Rosenschein echoed this, saying that this kind of intimidation students feel is no different than being attacked for being Jewish.

“Anti-Zionism is anti-Semitic,” she insisted. “Attacking our culture and identity by making people toss their support of Israel to the side if they want to join progressive causes is the same as making Jewish students take off their kipah or not observe Shabbat. This is part of our identity. That’s something people need to understand and proudly say on campus.”

‘Reach out and make them more active’

Nevertheless, students walked away from the CAMERA conference appearing invigorated and ready to tackle the challenges for the year ahead.

Keren Shaharabani, an Israeli undergraduate from IDC Herzliya, who like most Israelis served in the Israel Defense Forces, came to the conference looking to understand more about what is going on with American campuses and some of the difficulties they face. She told JNS that she was shocked and deeply moved by what she heard.

“Coming here to Boston and seeing 80 students from all over North America and the U.K. that are standing up for me as an Israeli and former IDF soldier just warms and fills my heart with compassion,” she said, explaining that many Israelis are unaware what is going on overseas.

“I didn’t understand; I didn’t know enough about what is going on. This is a reality that we as Israelis don’t know exists,” she said.

“We fight for each other. I saw these American students who fight for me, and now my mission is to go back to Israel and fight for them,” she said.

For Eibelman, who helped defeat a BDS resolution at Cornell last year despite facing attacks accusing him of racism and white supremacy by anti-Israel extremists from SJP, his goal is to reach out to the many Jewish people on campus who may be potential supporters, though are not yet involved.

“There are a lot of Jews at my school who are pro-Israel, but they have been passive about it,” he said. “Our goal is to reach out to them and make them more active.”

Haber said that going into this academic year, they are encouraging their students to develop more effective programming.

“When they bring a speaker to campus, we want them not just to speak to five students, but to speak to a 100 people, as well as meet with various other coalitions and partnerships on campus. We also want to have the speaker be involved in the entire event process—to help the students table or to be interviewed in the campus newspaper,” she said. “Israel is always changing, and we encourage students to keep up with the news and to try to meet regularly.”

Rosenschein said that this year, CAMERA is more prepared than ever. They now have fellows at some of the most challenging campuses, such as NYU, Columbia University, the University of California at Davis, Berkeley and San Diego, as well as Duke University.

“Our fellows ready to write more, hold more activities and programs. Students are ready to be active and not afraid to be the pro-Israel voice at these universities,” she stated. “Our Israel activists are more emboldened and outspoken than ever. People understand they are on the right side of history and the truth. They will not be intimidated.”