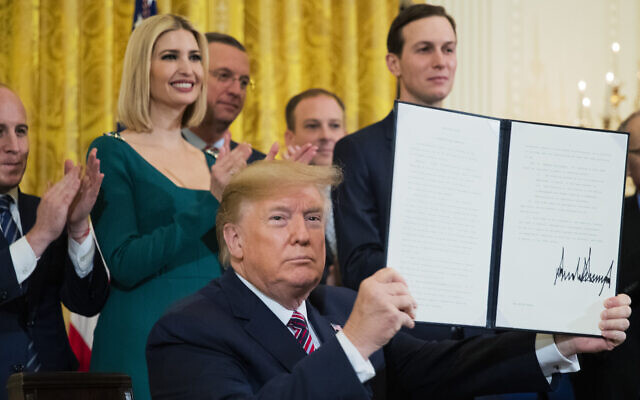 WASHINGTON — Flanked by evangelical Christian leaders, Jewish members of his administration, and even a few House Democrats, US President Donald Trump signed an executive order Wednesday that would target alleged anti-Semitism — primarily in the form of Israel boycotts — on college campuses.

At the annual White House Hanukkah Party, Trump put into place an order that will apparently require the US Department of Education to effectively interpret Judaism as a race or nationality, not just a religion. That will force the US government to withhold funding from colleges and universities if they fail to confront discrimination against Jewish students.

Critics, however, argue that the definition of anti-Semitism used in the order — originally formulated in 2016 by the International Holocaust Remembrance Alliance — will chill free expression on college campuses and suppress the speech rights of Israel critics.

Ahead of the signing, many expressed concern that the order would define Jews as a nationality.

Writing in the New York Times after the signing, Trump’s Jewish son-in-law Jared Kushner, said this was a misinterpretation.

“The executive order does not define Jews as a nationality. It merely says that to the extent that Jews are discriminated against for ethnic, racial or national characteristics, they are entitled to protection by the anti-discrimination law,” Kushner wrote.

“This action makes clear that Title VI of the Civil Rights Act, which prohibits the federal funding of universities and other institutions that engage in discrimination, applies to institutions that traffic in anti-Semitic hate,” Trump said before signing the document.

“This is our message to universities: If you want to accept the tremendous amount of federal dollars that you get every year, you must reject anti-Semitism,” he added. “It’s very simple.”

Yet the executive order has divided American Jewish leadership.

While major groups like the Anti-Defamation League and American Jewish Committee voiced strong support for the action, others worried it would backfire against Jews.

“This political theater is not only counter-productive, but it endangers the very people such advocates claim to defend,” said Rabbi Jack Moline, president of the Interfaith Alliance.

“With all due respect to the decision-makers who wrote this executive order, the Jewish community does not need President Trump to codify what Jews are into law,” he went on. “The president is changing Jewish status in an artificial way for callous political purposes.”

Last week, Trump was castigated by Jewish groups for spewing anti-Semitic tropes by telling a pro-Israel conference that Jewish Americans would vote for him to protect their wealth. In the same speech, he said that some Jews didn’t love Israel enough.

“This is truly the arsonist attempting to serve as the firefighter,” said Halie Soifer, executive director of the Jewish Democratic Council of America.

The order itself, she suggested, was a cause for concern.

“Any overreach by the administration in the enforcement of this executive order could chill protected speech, making it even harder to fight legitimate anti-Semitism,” she said.

“And if anyone needs examples of what anti-Semitism looks like, one need to look no further than the words of President Trump (and charges of dual loyalty), which would be classified as anti-Semitic according to his own executive order.”

The order was based on stalled legislation in Congress that had support from both sides of the aisle, but that never advanced.

The definition it uses to denote anti-Semitism includes language that some worry is overly vague, including “a certain perception of Jews, which may be expressed as hatred toward Jews.”

Kenneth Stern, the expert who drafted the definition adopted by this executive order, has publicly opposed its application to college campuses. In a New York Times op-ed, he wrote: “If this bill becomes law … students and faculty members will be scared into silence, and administrators will err on the side of suppressing or censuring speech.”

But Ted Deutch, a Democratic congressmen from Florida who sponsored the original legislation, wrote in The Times of Israel last week that the definition “was drafted not to regulate free speech or punish people for expressing their beliefs.” Rather, he wrote, it “can serve as an important tool to guide our government’s response to anti-Semitism.”

At Wednesday’s event, Trump said that part of his rationale for moving forward with the order was to target the Boycott, Divestment, and Sanctions (BDS) campaign against Israel.

His daughter Ivanka and son-in-law and senior adviser Jared Kushner had been warning him about the movement for years, he said.

“Jared and Ivanka have been talking to me about this for about three years now, maybe longer than that, but I go back about three years where there was something that I could do about it,” he said. “In this position, we can do things about it. Before that, not quite as much. I’d be just like you: Successful, doing nicely. But not for this.”

The president also lamented the shooting in Jersey City, New Jersey in which a gunman opened fire at a Kosher super market.

“Our thoughts turn to the grieving families in New Jersey,” he said. “With one heart, America weeps for the lives lost, with one voice we vow to crush the monstrous evil of anti-Semitism whenever and wherever it appears.”