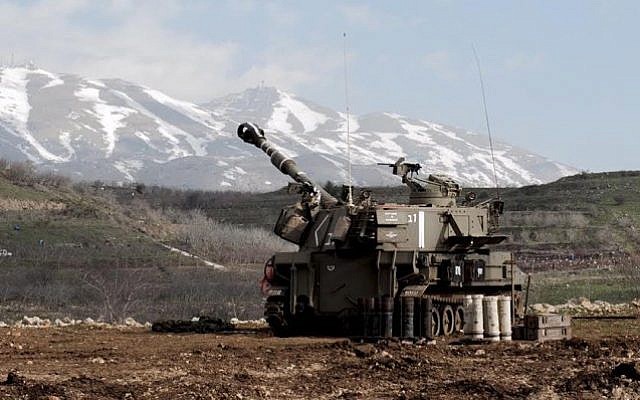 The army’s Northern Command said Thursday it had canceled all leave for combat brigades on Israel’s northern border, just hours after the military’s commander in the north warned Israel would offer a “harsh” response to any Hezbollah attack.

Israeli troops on the Lebanese and Syrian borders have been on high alert this week over fears of a reprisal attack from Hezbollah following an alleged Israeli strike on the terror group in Beirut on Sunday and confirmed airstrikes on an Iranian position in Syria that killed two Hezbollah members on Saturday night.

The Israel Defense Forces believes Hezbollah intends to attack IDF soldiers or a military installation on the border, and not civilians.

Earlier Thursday, Northern Command chief Maj. Gen. Amir Baram, who ordered the move, met with mayors of northern communities in a bid to calm jitters over the escalating tensions.

Several mayors asked him if they should open municipal bomb shelters in anticipation of possible conflict with Lebanon. Baram replied that such a step was not yet necessary.

He then seemed to threaten Hezbollah with war.

“You should be preparing not for Hezbollah’s response against the IDF, but for their response to our response” to such an attack, he quipped.

He vowed that “if an IDF soldier is so much as scratched, our response will be harsh.”

Baram said the army was not hampered by the upcoming elections in September.

“The decisions surrounding the latest strikes don’t depend on the elections or on political decisions. The chief of staff has blanket approval to act to disrupt the Iranian entrenchment, and all actions [directed to that end] don’t require the decisions of the political echelon,” Baram told the mayors.

The Lebanese frontier was especially tense Thursday, following an incident the night before Lebanese troops fired on Israeli drones, claiming they had entered Lebanon’s airspace.

The army on Tuesday restricted the movement of military vehicles along roads close to the Lebanese border. Those limitations were not imposed on civilians in border communities.

Baram’s comments follow similar messages delivered by Israeli officials this week, both against Hezbollah and against Lebanon, which Jerusalem sees as complicit in the terrorist militia’s activities.

“The Israeli response to an attack will be disproportionate,” an unnamed senior officer told Israel’s Channel 12 news on Monday night.