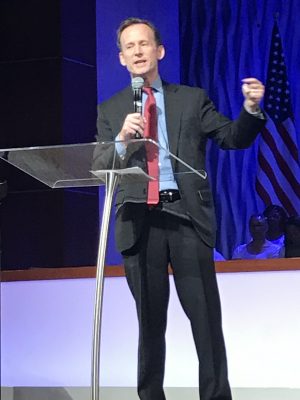 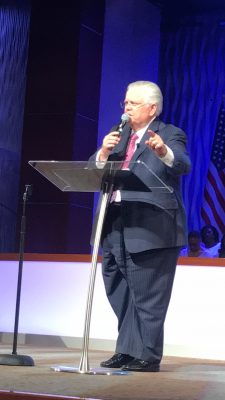 The event took place the evening before the Government Affairs Committee of the Nevada State Assembly was set to hold a hearing on legislation (SB 26) that prohibits the state from contracting with or investing in entities that boycott Israel. Speakers at the Night to Honor Israel rallied attendees to continue grassroots efforts to pass the legislation.

During his remarks, Hagee noted that by the end of the year, CUFI expects more than half the states in the Union to have advanced anti-BDS measures.

CUFI has been involved in the Nevada legislation since its inception. The bill was born of a conversation between CUFI representatives and Lt. Gov. Mark Hutchison at last year’s Las Vegas Night to Honor Israel, at which Hutchison was the keynote speaker.

Since the bill’s introduction CUFI has distributed an action alert supporting the measure to its Nevada-based membership, and CUFI founding executive director and active Board member David Brog delivered remarks in support of the bill at a Nevada State Senate committee hearing earlier this year.

“The BDS movement is fundamentally an anti-Semitic movement and one that endangers peace in the Middle East… People who see no good in the state of Israel, and no evil beyond its borders, are bigots pure and simple,” Brog said during his testimony.