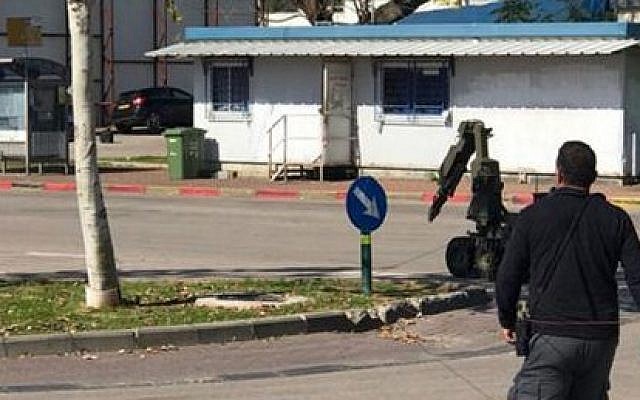 Israeli security forces on Monday found and disarmed a small improvised explosive device that had been planted along a northern West Bank highway, the army said.

The foiled roadside bombing came days after an IED that had been planted next to a natural spring in the central West Bank was triggered by terrorists as an Israeli family visited the site, killing a teen girl and seriously injuring her father and brother.

On Monday afternoon, a military tracker spotted a suspicious object along the Route 555 highway near Nablus, between the Itamar and Elon Moreh settlements. The highway was closed to traffic, and police sappers were called in to investigate, the Israel Defense Forces said.

Upon inspection, the sappers determined that the object was an IED and disarmed it.

“Following the neutralization, which was carried out with a robot, it was indeed verified that this was an improvised explosive device that was made out of a fire extinguisher,” police said.

The relatively small device did not appear to be of the same variety as the larger bomb used in last week’s attack.

The Israel Defense Forces, Shin Bet security service and Israel Police have been searching for the bombers since the Friday attack, setting up roadblocks, collecting surveillance camera footage and detaining suspects.

At approximately 10 a.m. Friday, the explosive device was detonated at the natural spring, known as Ein Bubin, near the Dolev settlement northwest of Ramallah, as three members of the Shnerb family from the central Israeli town of Lod were visiting.

Rina Shnerb was pronounced dead at the scene. Her father, Eitan, a rabbi in Lod, and her brother Dvir, 19, were taken by military helicopter to a Jerusalem hospital with serious injuries. Their condition improved through the weekend and they were set to be moved out of intensive care, a doctor told media Sunday.

Police sappers determined that the bomb had been planted earlier at the spring and was triggered remotely when the family approached it.

Palestinians reported Monday that troops had raided several towns near Ramallah as part of the manhunt, hours after two top Israeli politicians said security forces had apprehended the terrorists behind the bombing, prompting an unusual statement from the Shin Bet security service denying the claim.

“The statements regarding the capture of the terrorists who committed the attack in Dolev do not express the opinion of the Shin Bet nor did they receive approval from the Shin Bet, which is leading the investigation,” the security service said.

“The investigation into the terror attack is in full swing, and [people] must wait until it is completed, and for the official and certified statements regarding the results.”