ARMENIA ANNOUNCES IT WILL OPEN EMBASSY IN ISRAEL 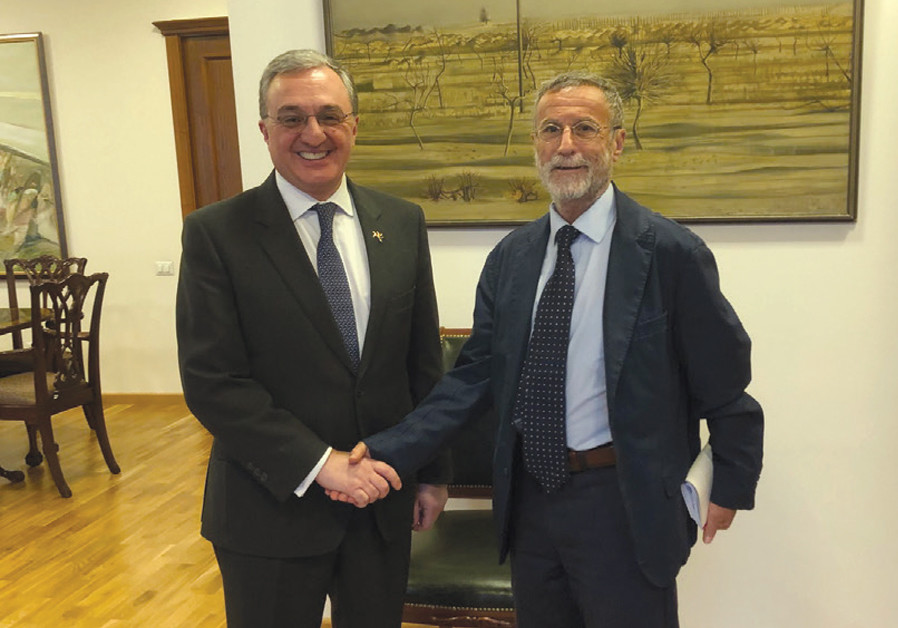 Armenia announced on Thursday that it intends to open an embassy in Tel Aviv, a move expected to bring the once cool ties between the two countries to a different level.

“Israel is an important player in the Middle East,” Foreign Minister Zohrab Mnatsakanyan was quoted as saying in a cabinet meeting. “The opening of the embassy will contribute to the deepening of bilateral relations and protection of Armenia’s interests in the region.”

According to the cabinet decision, the move will also strengthen the Armenian Apostolic Church’s presence in the country. The new embassy is expected to open by the beginning of next year.

Mnatsakanyan said that Armenia would welcome a reciprocal move by Israel, and that “this is on the agenda of our dialogue.” Israel gave no indication, however, that it was considering opening an embassy in Yerevan.

Foreign Minister Israel Katz praised Armenia’s decision, saying that it is a “significant step in the development of bilateral relations” between the two states.

Armenia will be the 90th country to open an embassy in Israel, which “attests to the constant increase in the strength of Israel’s position in the world,” according to Katz.

Foreign Ministry spokesman Nizar Amer said that this move reflects the significant improvement of ties between the two countries that has taken place over the last year.

“The opening of the embassy is a new and important chapter in bilateral relations, and we are confident that this will further strengthen the friendship between the two peoples and enhance cooperation between the states in all areas,” Amer said.

The two countries established formal diplomatic relations in 1992 but it remained on a low burner, partly because of Israel’s close ties with Azerbaijan, Armenia’s arch foe, and Armenia’s close relationship with Iran.

The tenor of the ties started to change in July 2017, when then-regional cooperation minister Tzachi Hanegbi visited Armenia, the highest level visit by an Israeli minister since 2012.

“After years without a ministerial visit to Armenia, I came here as an emissary of the prime minister to give expression to the strong friendship between our countries,” Hanegbi said upon meeting Armenian Prime Minister Karen Karapetyan.

Four months after that visit, Armenia’s foreign minister at the time, Edward Nalbandian, came to Jerusalem and met Prime Minister Benjamin Netanyahu, and the two talked about strengthening relations in the fields of hi-tech, cyber and agriculture.

He said that while Armenia would like to see Israel reciprocate by opening an embassy in Yerevan, this would not be a prerequisite for Armenia. He also explained why Yerevan was not considering placing its embassy in Jerusalem.

“For a small country like Armenia, it is very difficult to make major departures from a more traditional stance without provoking major reactions,” he said. “For the time being there is no change in the Armenian approach about where the would-be embassy should be, but fundamentally, I would not focus on that. The important thing is to gear-up the relationship.”