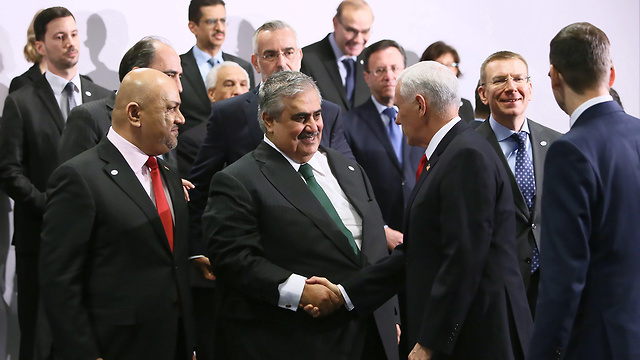 Israeli Prime Minister Benjamin Netanyahu’s office on Thursday released a video of a closed meeting in which senior Gulf Arab officials play down the Israeli-Palestinian conflict, defend Israel’s right to defend itself, and describe Iran as the greatest threat to regional peace.

The video, bearing the insignia of Netanyahu’s office, gave a glimpse into the behind-the-scenes contacts the Israeli leader frequently boasts of, but which are rarely seen in public. The video was recorded on a mobile device and it was not clear who took it.

Netanyahu’s office briefly made the YouTube video available to a small group of journalists traveling with him before quickly removing it.

It was unclear whether Netanyahu, who is running for re-election, intended to leak the information or distributed it mistakenly. But the decision to take the video down indicated the Gulf officials, whose governments do not have formal diplomatic relations with Israel, had not consented to its release.

The edited, 25-minute video shows a series of comments made by officials from Bahrain, Saudi Arabia and the United Arab Emirates on a panel discussion at a U.S.-sponsored security conference in Warsaw. Some 60 nations participated in the gathering, which was focused heavily on countering Iran’s growing influence in the region.

Bahrain’s foreign minister, Khalid Al Khalifa, made some of the toughest comments, saying that Iran is a far bigger threat to regional security than the long-running Israeli-Palestinian conflict.