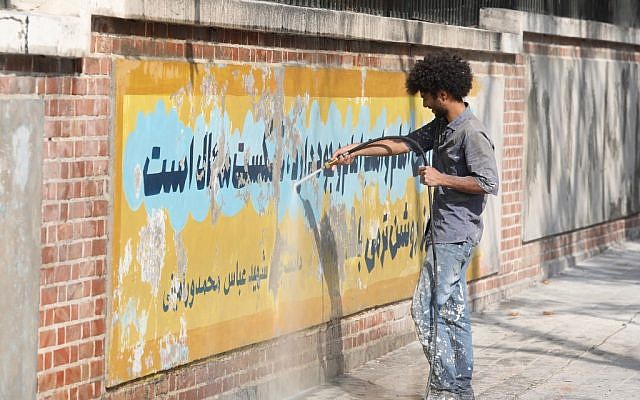 TEHRAN, Iran — Famous murals celebrating Iran’s Islamic Revolution daubed on walls of the former US embassy in Tehran have been erased to make way for new paintings to be unveiled on the fortieth anniversary of the hostage crisis.

Three workers were on Sunday afternoon seen removing the original artwork with a sandblaster against the wall of Taleqani avenue, bordering the south side of what was once dubbed a US “spy nest” in central Tehran.

On November 4, 1979, less than nine months after Iran’s last shah was toppled, pro-revolution students took Americans hostage at the embassy to protest the ex-shah’s admission to hospital in the US.

The crisis ended 444 days later with the release of 52 Americans, but the US broke off diplomatic relations in 1980 and ties have never been restored.

Among the images being erased was one of the Statue of Liberty — with a skull instead of a face — set against the red, white and blue of the American flag, colors that extend into barbed wire fencing shown to be imprisoning Iran.

Suffering a similar fate Sunday afternoon was a revolver in stars and stripes aligned against eight-pointed stars — an iconic image often photographed with passers by in the frame, so as to seemingly threaten those depicted.

New murals are set to be unveiled to mark the anniversary of the capture of the US embassy around November 4, said Bahram Amini, manager of the “13 Aban” museum, quoted by the ultra-conservative Fars news agency.

The thirteenth day of the Persian month of Aban corresponds with November 4.

That looming anniversary comes with tensions between the US and Iran having spiked afresh.

US President Donald Trump unilaterally pulled out of a 2015 multilateral nuclear deal with Iran in May last year and subsequently reimposed biting sanctions.

For Amini, “it was necessary to… update” the murals, since they were “drawn decades ago.”

He told Fars that updated murals have been conceived by students belonging to the Basij, a militia comprised of volunteers that is part of Iran’s elite Islamic Revolutionary Guard Corps.

“The new paintings are absolutely anti-American,” he reportedly said.

A primary school teacher named Beigui said she found the murals useful “for the sake of memories we have from those days.”

“When the revolution took place, I was a schoolgirl. The murals on the wall helped bring back memories of the era,” she said.

“I should like the wall to retain at least one of the (original) murals” she said. “If they must be changed, leave at least one to commemorate the events of that time.”

She also wishes to see more vivid colors, to inspire children with “a positive energy.”

Amir Hossein, a shopworker in his twenties, was skeptical about the make-over.

“What do they want to prove with these paintings?” What are they trying to prove by removing or changing them?” he asked.

Mohammad, a young delivery man, believes “there should only be paintings of peace and friendship.”

“Peace and friendship with the American people, not with their government,” he added.

“Our government has problems with their government, but we have no problem with the American people.”